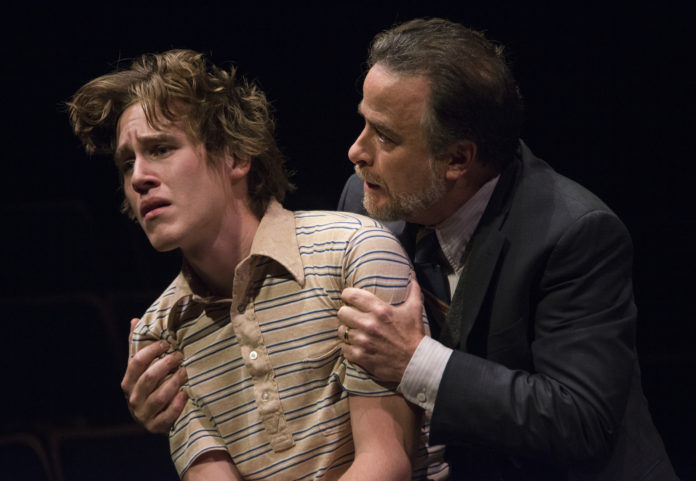 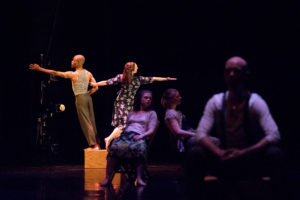 It is only fitting that as Ted Pappas moves on from being Artistic Director of Pittsburgh Public Theater he begins his last season with a play that is of significance to Ted.

Equus is the story of Alan, a young stable hand who commits a horrible crime against the horses he cares for and is subsequently sentenced to a hospital where his story turns to focus more with the doctor that is assigned to his case. Equus then shifts its focus to Dr. Martin Dysart and the turmoil he is facing in his personal life, with no children and a wife that no l 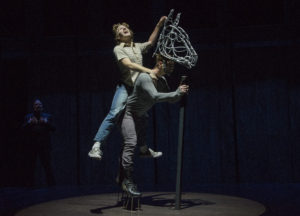 onger has interest in him. The doctor makes extraordinary moves to uncover Alan’s motive and is met with wild stories from Alan that include an over protective father, a religious mother and another stablehand who is attracted to Alan.

Equus did not use real horses when it rode into The O’Reilly Theater, instead actors were outfitted in iron horse heads and a horseshoe-shaped boot. This costume allowed the horses to take on a human factor and the hooves became very loud throughout the play. During the scene where Alan showed how he started to ride Nugget, the actor climbed upon the other actors back as they turn around in a circle in this climax to the story line.

Equus plays until October 29th at the Pittsburgh Public Theater which makes its home in the O’Reilly Theater at 621 Penn Ave, Pittsburgh, PA 15222. For tickets call 412.316.1600, visit ppt.org or visit the O’Reilly Box Office.