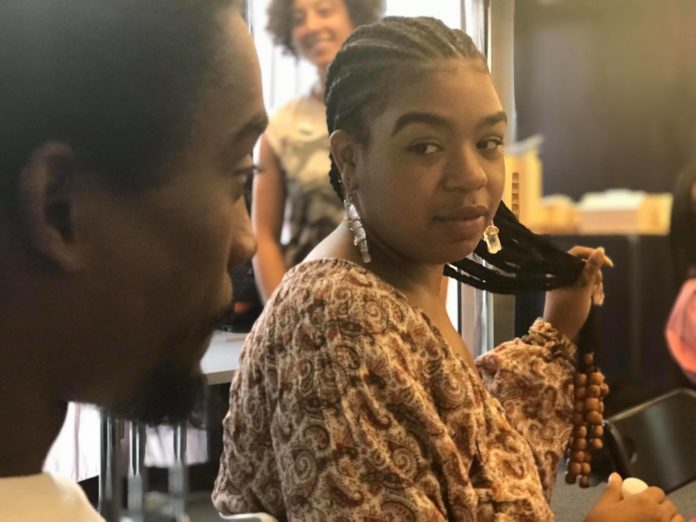 “ The multi-channel projected video that includes interviews and environmental footage from places where people of African descent work to keep their culture alive, including Cape Town, Charlottesville and New Orleans’ Ninth Ward post-Katrina. Ivey is among seven artists featured in the latest incarnation of Civil Rights and Civil Wrongs: South Africa and US, an exhibition currently on view in the Mattress Factory Museum’s Monterrey annex.” – Mattress Factory Press Release

Following his installation, filmmaker Chris Ivey invited women and femmes to openly reflect on Pittsburgh’s history of silence around black women’s death. Panel members Tresa Green-Murphy, Tara Coleman, and Vanessa German (who unfortunately couldn’t make it due to a family emergency); lead a discussion titled “Let’s talk about the silence: How black women die in the “Most Livable City”.

“Last year, just one in four assault shootings in the city were deadly, versus almost a third in 2013. Since 2006, Homewood North and South, the city’s two neighborhoods with the most shootings, have seen 21 percent and 30 percent fatality rates, respectively, a 43 percent difference.”CHRISTOPHER HUFFAKER August 14, 2017

Watching his visual installation you are immersed into his video documentation. On the third floor of the Pittsburgh Mattress Factory, you are framed by four visual videos. All videos were recorded at the same time from various points of view, or different videos are used to visually accent the topic.

Chris Ivey released a documentary, called “East of Liberty“ in June of 2017. The documentary explores issues of race and class, and addresses resident’s fears about gentrification in the Pittsburgh East Liberty area. During the reveal, Chris Ivey asked three women to be on the panel to lead a discussion after the showing of the video. On the panel was Pittsburgh resident Tresa Murphy-Green.

Tresa Murphy- Green is an activist in the local Pittsburgh arts community and leader in the recent Antwan Rose Protest.

While on the panel for “East of Liberty”, Murphy- Green vented her perspective on how Pittsburgh handles the death of African American women via homicide. In 2017 Murphy-Green lost several female friends to gun violence and still have not received any answers or leads on suspects for their murders.

“My experience is different being a Black Woman, and realizing all the isms, that I have to deal with on a day to day. The isms are different for me, because of the color of my skin. Period! And I see that, and I recognize that! That’s a part of the reason why I am an activist!”- Tresa Murphy-Green “East of Liberty Panel Discussion”.

In the discussion, the media was also to blame for lack of representation of African American Female murders in Pittsburgh. During June of 2017, a young white woman who attended the University of Pittsburgh was murdered. Pittsburgh major media networks gave extensive coverage of details following the death of the young college student. While murders of young African American females receive little to no coverage at the time. Which left the question, how is the community suppose to help solve murders that they are completely unaware of?