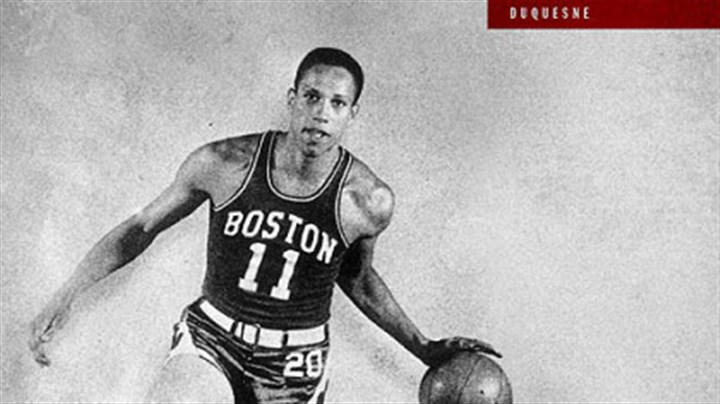 Most people know the story of Jackie Robinson, who broke Major League Baseball’s color barrier in 1947 with the Brooklyn Dodgers. If you ask those same people who broke the National Basketball Association’s color barrier, you might get a quizzical look in return. After downsizing to 11 teams prior to the 1950-51 season, the NBA began including black players. One of first players to integrate was a 6’5” Forward, Pittsburgh native from Duquesne University, named Chuck Cooper.

Charles (Chuck) Henry Cooper grew up in Homewood, where he graduated from Westinghouse High School in 1944. During his senior year, he averaged 13 points and earned All City honors. Cooper attended West Virginia State College (now University) and played a semester of basketball before being drafted into the United States Navy to serve in World War II. After completing his service, Cooper enrolled in Duquesne University, where he became one of the first black All-Americans and led the Dukes to a 78-19 record and the NIT twice during his four years.

Cooper was the first black player taken in the NBA Draft, after being chosen 13th overall by the Boston Celtics in 1950.[1] Playing for legendary coach Red Auerbach, Cooper and future Hall-of-Famer Bob Cousy helped bring the Celtics back from their early years’ mediocrity. For four seasons, Cooper served as a reliable piece for the Celtics, averaging 6.8 points and 6.6 rebounds per game. Following the 1953-54 season, Cooper was sold to the Milwaukee Hawks, which moved to St. Louis in 1955. In January 1956, Cooper was released by the Hawks, though he was quickly acquired by the Fort Wayne Pistons. It was with the Pistons where he finished his NBA career at the end of the 1956 season.[2]

Following his professional basketball career, Cooper earned his Master’s degree in Social Work from the University of Minnesota and returned to Pittsburgh where he worked for the city’s school board and became the first black department head, serving as the director for parks and recreation. Cooper also worked as a supervisor for Pittsburgh National Bank’s affirmative action program.[3] Unfortunately, he succumbed to liver cancer in 1984, dying at the age of 57.

Black players in the NBA today can thank Chuck Cooper for serving as part of the first wave of non-white players to break down barriers in the league. Coach Auerbach remarked that Cooper “had to go through hell”[4] in the majority-white league to earn playing time and respect among his peers. Cooper was elected to the Pennsylvania Sports Hall of Fame in 1974 and in 1983, Duquesne University established the Chuck Cooper Award to recognize the underclassmen who excelled in basketball.[5] In 2009, Cooper’s family established the Chuck Cooper Foundation to expand educational opportunities for black students in Pittsburgh through scholarships and grants. In the same year, Duquesne University introduced the Chuck Cooper Classic, a home game in which his faithful service to Pittsburgh and the University is remembered.