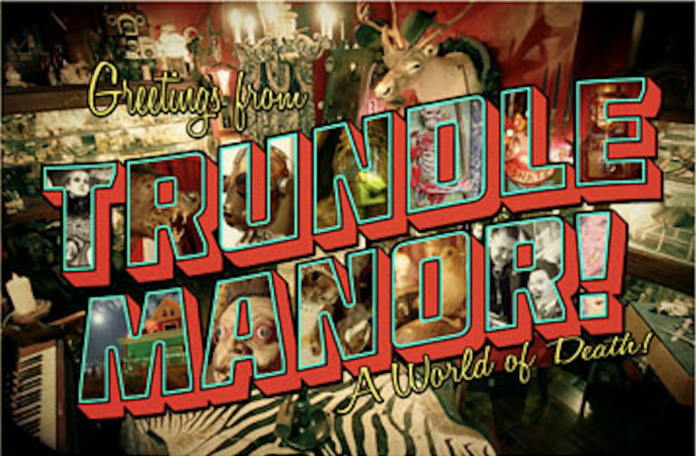 By Kristy Locklin
For husband and wife Anton Raphael and Rachel Rose Miriello, romance is dead.

The couple, better known as Mr Arm and Velda Von Minx, spent their first date doing taxidermy in the basement. The squirrels they stuffed served as silent witnesses at their 2016 nuptials.
“It was love at first slice,” Mr Arm says, twirling his mustache.
The Miriellos are the proprietors and residents of Trundle Manor, a private home that, over the past decade, has become a roadside attraction. They proudly embody the “The Addams Family” theme song: they’re creepy, kooky, mysterious, spook, all together ooky.
At first glance, the three-bedroom Victorian on Juniata Street in Swissvale looks like a typical suburban dwelling, but behind the heavy wooden door is a fascinating collection of oddities, from antique medical implements and weaponry to ‘50s pin-up girl photos and dead things floating in jars of formaldehyde.
Kitchen appliances are hidden behind cabinets fabricated to look like something out of a mad scientist’s labratory. The bed is propped up by two coffins. There are secret passageways and surprises around every corner. 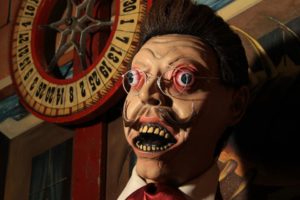 There’s so much to see in this punk rock Mütter Museum, you’ll wish you had a few extra peepers to take it all in. (Velda’s eyeball paintings are for sale in the gift shop.)
Mr Arm, 36, grew up just a few blocks away in Edgewood. His parents, artists who own New Guild Studio in Braddock, nurtured their only son’s interest in the macabre. They took him to flea markets and antique shops and allowed him to run wild in the forest, where he searched for animal bones. His collection started on small shelf and eventually filled his entire bedroom. 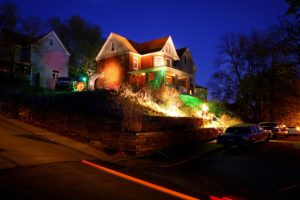 He bought the Swissvale property 12 years ago to house the massive assortment of knickknacks.
Velda, 30, knew about Mr Arm through social media (he was a member of a rockabilly car club she followed) and arranged a private tour of Trundle. They’ve been together 11 years.
The kindred spirits opened their home to the public in 2009. Since then, more than 7,000 people have explored the not-so-humble abode. Tours are by appointment only and donations of cash, booze or oddities are accepted and encouraged.
A few visiting children have cried. The Miriellos admit their residence can be a little unnerving, but, they, themselves, are not. They do not murder small woodland critters for aesthetic purposes. Most of the taxidermied residents of Trundle Manor are older than they are.
“You can be an unusual person, but you don’t have to be a dick about it,” Mr Arm says.
Velda agrees. “We owe it to other weird people to be cordial and charming.”

In addition to the affection they have for each other, the Miriellos have a soft spot for their recently departed black cat, Little Devil. Trundle Manor’s mascot keeps watch over the parlor via a six-foot tall portrait hanging on the wall. The feline is in the process of being professionally freeze dried and will soon be back home with his family.
They took some time to mourn their loss, but the house is often the site of
private parties, burlesque shows, movie screenings and Vaudeville acts.
When they feel the urge to go out, but don’t want to leave the comfort of their collection, they rev up the Mobile Office of Villainy.
The 1991 Grumman Olson step van is Trundle Manor on wheels. There are ornate chairs to sit on, hidden compartments, weird noises and interesting artwork. This fall it will hit various events, including the Allentown Night Market.
One day, the Miriellos hope to run a bar or bed and breakfast, where creatures from all walks of life (and death) can intermingle. Until then, they’re happy to be a morbid tourist trap … one that will keep evolving.
“We’ll never stop,” Velda says. “Even in death we won’t be done because we’ll haunt people.”