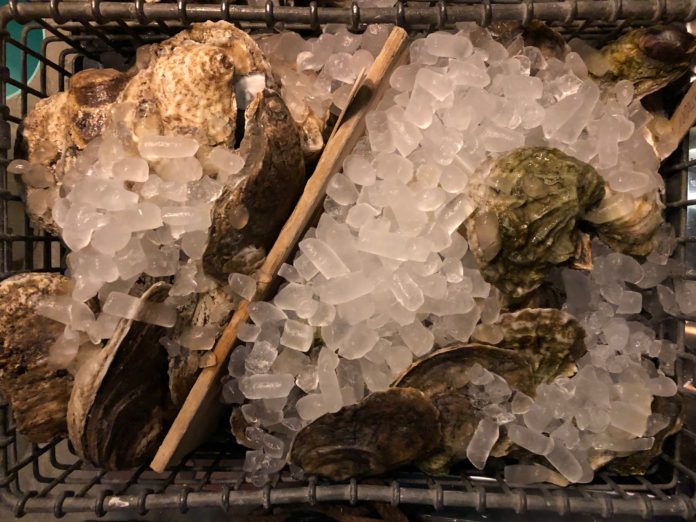 Denis Marron, owner of The Merchant Oyster Co and or, the Whale, put on his first industry night oyster shucking contest last Monday in Lawrenceville. While he and his staff looked at this as a chance to run through the logistics and work out the kinks, it turned out to be a night of a lot of laughs, until the bell rang, then it was game on!

The inaugural “Shuck and Suck” pitted a Colonia from Smallman Gallery, Black Radish, The Commoner and the home team Merchant Oyster Co. The event takes place on the first Monday of every month, next event on Monday, June 4th. The local restaurants will compete for the SHUCK ‘N SUCK BELT.  The teams (4) of restaurant industry professionals will consist of one shucker, and one sucker competes to see which team can open and eat the most oysters in 2 minutes. If you spent any time around restaurant and bar professionals, you know they are a close-knit group, joking, enjoying drinks and busting balls, but when it’s time to throw down, make no mistake this competition got real. As you can imagine, Merchant Oyster Co. was the odds-on favorite to take this first contest and they did, but it was a lot closer then I expected. The June teams will be announced shortly, and I look forward to seeing a few of the other local Oyster restaurants throw their hats into the ring…….

This industry night with good friends, good food, and good beer is open to the public. Some come out and enjoy 1/2 off Narragansett and 1/2 off oysters from 9-11pm along with some good ole’ Yacht Rock jams.