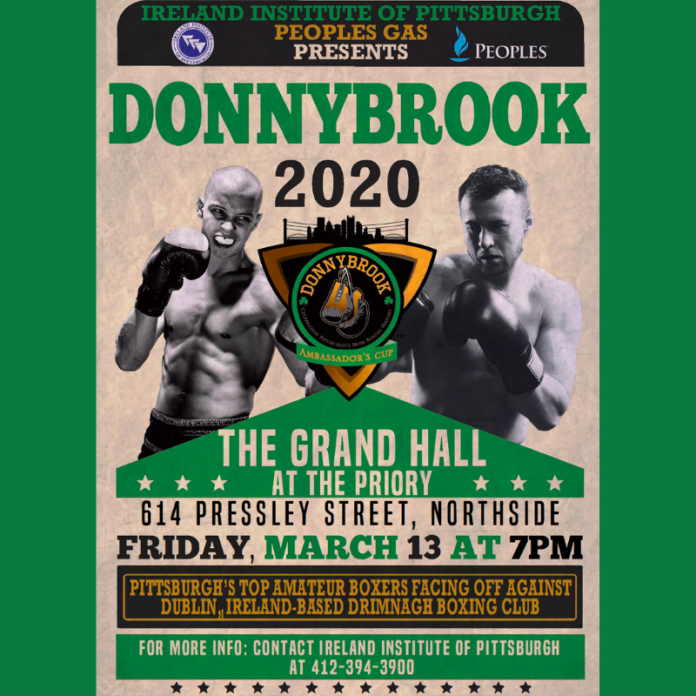 After winning his final boxing match and retiring as a competitor, Michael Manna received an offer from Jim Lamb, the President of the Irish Institute of Pittsburgh contacted him about bringing back an event from his days as an amateur.

“It’s such a big thing for an amateur boxer”, said Manna. “Whether you go pro or you’re not going pro.”

The Donnybrook 2020 returns after a four-year absence on Mar. 13, to the Grand Hall at The Priory. A group of boxers from various gyms around Pittsburgh takes on a team from Ireland to show who has the best team of amateur fighters.

Manna called the return of the amateur boxing showcase a “rebuilding year” after the absence of the event. Donnybrook’s initial run, from 2014 to 2016, was the brainchild of Michael Diven, a former state representative and city councilman.

Diven brought in teams from Ireland [with help from Lamb], Cuba, and Italy to fight some of Pittsburgh’s best amateur boxing talent.

All future Donnybrooks will be run by Manna, Lamb, and Rich Donnelly. Their goal is to restore the international ties Pittsburgh amateur boxing once had.

Manna has appeared in two of these events. In the first-ever Donnybrook, he fought an opponent on short notice after one of his teammates dropped out.

Professional boxer Matt Conway fought in the first and second events and recently competed on the undercard of the highly anticipated Deontay Wilder vs. Tyson Fury title fight.

Zach Brenner of Munhall, a boxing fan who frequents a lot of the local events around town, is excited the international showcase is back.

“Some of the great fighters from the city of Pittsburgh were of Irish descent”, said Brenner. “I’m excited to have [this event back].

Manna fought against Team Italy at the Priory in October 2017. Being of Italian descent, his favorite opportunity against international competition.

“I was the only person who could speak Italian a majority of the time, so I had to translate for [the Italian team],” said Manna. “I wanted to face the best, win, or lose. I got the chance to face a guy who is currently ranked ninth in the world in the amateur ranks.”

Team Ireland boxers represent the Drimnaugh Boxing Club in Dublin, Ireland. The gym is coached by Michael Carruth, a former professional boxer who won the gold medal for Ireland in the 1992 Summer Olympics in Barcelona.

Team Pittsburgh will be represented by twelve gyms throughout the Allegheny Mountain Association, the sanctioning body of amateur boxing in Western Pennsylvania and Eastern Ohio.

The team that wins the most bouts will win the Ambassadors Cup. Pittsburgh won the inaugural event in 2014, Ireland won the last two in 2015 and 2016.

The fights will be broadcasted on Pittsburgh Community Television, which houses a boxing talk show “Ring Talk,” which focuses on the world of boxing and the local scene.

Claudio Reilsono, one of the announcers in PCTV’s coverage of the event, believes any event that gives young boxers stiff competition is a plus.

“Events like this could [help build internationally recognized fighters],” said Reilsono. “They get the opportunity to fight others who are serious about this and see where they are right now.”

Some people to look out for at this event are Teddy Mrkonja Jr. and Danny Bodish. Mrkonja fought in the first event in 2014, Bodish has won at all three events.

“Teddy’s out for vengeance after a bad decision in 2014,” said Manna. “I’m sure they’ll train their guy hard; the Irish don’t like to lose.”

In addition to organizing the event, Manna and Donnelly will serve as the head coaches for Team Pittsburgh. They’ll lend instruction alongside the fighter’s main coach.

“We would like to bring back the Donnybrook where it was before,” said Manna. “Hopefully, the event takes off so we can have Team Pittsburgh fighting different countries around the world.”

Get your tickets for the event here.