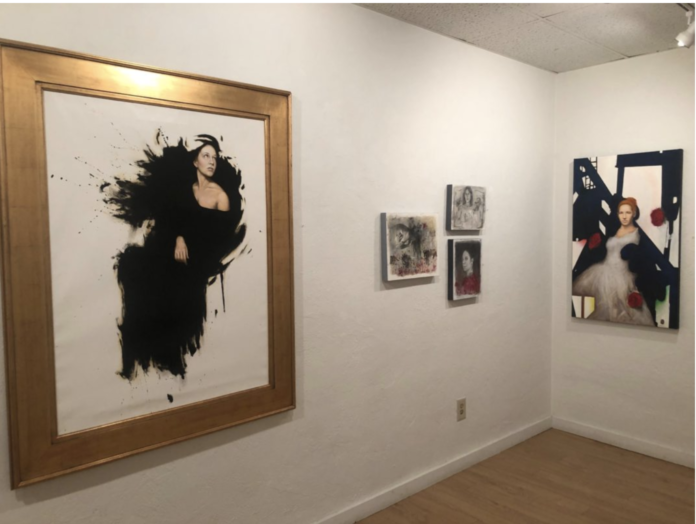 In today’s age of social media, many people primarily focus on self-depiction. In order to capture this “self-depiction,” users of Instagram, Facebook, Twitter, etc. typically take solo photos of themselves or “selfies.” Owner of the Percolate: Art Space, Gallery, Creative Laboratory, and local artist, Carolyn Pierotti, noticed this trend and wanted to take on this concept from an artist’s perspective. 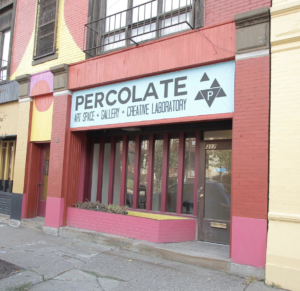 Percolate is hosting the “About Face” show. The exhibition opens February 2 and runs through March 29, featuring the works of local artists Jason Schutzman and Paige Tibbe. Influenced by the detailed and unique Obama presidential portrait by Kehinde Wiley, the Greek’s concept of placing royal leaders on coins, and the modern-day selfie, Pierotti wanted to display the works of local artists with a focus on 21st-century portraiture. “This form of portraiture captures the subject on a much more personal and emotional level compared to a digital photo,” says Pierotti when asked about choosing this theme for the upcoming show. 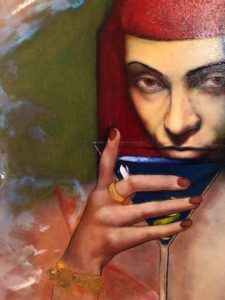 Jason Schutzman and Paige Tibbe are the artists that bring the gallery to life these next couple of months. The “About Face” show will display brand new work from both artists, whom both use paint and oils on their canvases to “define the human experience through traditional and sometimes playful imagery.” Schutzman’s work mixes thoughts and emotions together in his “new modernist” approach to art. His portraits consist of faces from his imagination and contain many hidden subjects open to interpretation. “Jason’s work is an interpretation of anything you want as the viewer,” said Pierotti. “It’s like when a child looks at the clouds and makes up which one looks like.” 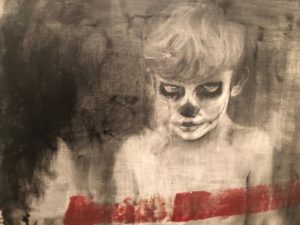 Tibbe considers her work to be “contemporary portraiture,” that complements Schutzman’s well. Influenced by Gustav Klimt, Tibbe’s work has a more traditional vibe and more fine-tuned compared to other artists. However, unlike Schutzman, Tibbe finds inspiration for her work in photographs of others instead of imagination. According to Tibbe, “Truth, honesty, and a never-ending introspection are ideas that continually push me to create.”

Pierotti has big and exciting plans for April after the show, so stay tuned to hear more. In the meantime she wants everyone to know, “I pride myself on what I do here and supporting the arts and artists that come into this space. It’s important to visit studios and meet with the artists to fully appreciate the work.” Check out Schutzman and Tibbe’s artwork at the “About Face” show at Percolate Gallery to allow yourself to “weave your own story” through viewing this form of 21st-century portraiture.