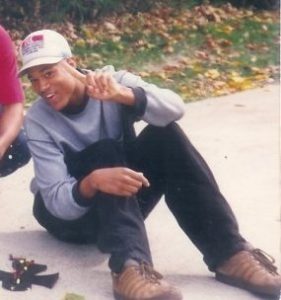 Emmai Alaquiva grew up with a love of the arts, specifically hip-hop music. He grew up listening to artists like De La Soul, KRS-1, and Rakim.  “Hip-hop saved my life,” said Alaquiva. “If it wasn’t for art penetrating my heart and mind, I wouldn’t be where I am today.” His love for hip-hop led him to create his own hip-hop group, production studio, education group, and later a nomination to the Pennsylvania Council of the Arts.  “To be able to serve on the council, 67 counties overseeing millions in arts funding is mind-blowing,” said Alaquiva.

Emmai grew up in Wilkinsburg, during the economic downturn of the area, but he tried to stay positive during the hard times.  “Stores were closing, schools were getting worse,” said Alaquiva. “It wasn’t the greatest place growing up, but I knew the potential of Wilkinsburg.”

His first exposure to hip-hop came from his mother. She had bought a ColorTyne entertainment center consisting of a TV and a double cassette stereo with a record player. She would purchase a lot of music, but one cassette caught Emmai’s ear. De La Soul’s iconic song “Me Myself and I.”  “She bought it because it sampled a song called ‘Rapper Dapper Snapper’ by Edwin Birdsong”, said Alaquiva. “When she went to work, I would blast the hell out of the cassette.” 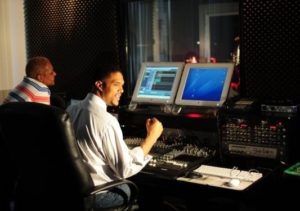 From then on, he would expand his knowledge of the genre and would cut grass, hedges, rake leaves, and shovel snow to purchase old jazz records from Wes Montgomery and John Coltrane.  His love for music and wants to acquire records made him sort of an outcast. He was okay with being the weird artsy kid around the neighborhood because he had bigger plans. “I had to be creative and I had to learn the value of a dollar in order to make it,” said Alaquiva. “I sacrificed not having the latest gear or freshest haircut, so I could record music.”

Emmai and his friend, Akil Griffin, under the name Akil Esoon created Pensoulzinakup. They came up with the name because they were making their mark like a pen, in an uncivilized place, or a cup. The group was made up of three members, Emmai, Akil and Roland “DJ Supa C” Matthews.  The group was made after a night of deejaying and rapping at a sleepover. The next morning Emmai called Supa C and Akil with an offer. “He needed Dancers and a DJ,” said Esoon. “We agreed and it all took off from there, we became Pensoulzinakup.” 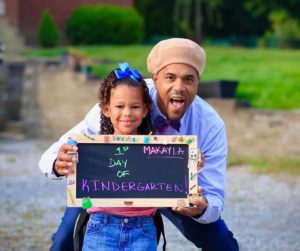 They became one of the pioneers for Pittsburgh’s hip-hop scene in the early 90’s. From opening for artists who came through the city to be in a Public Service Announcement spot for PBS, encouraging young people to stay in school.  “We thought our artistic contributions would bring the world together,” said Alaquiva. In one of the group’s final performances, they opened for The Notorious B.I.G. Biggie Smalls. An experience Akil called “tremendous.”

“We walked to his car, we thanked him for allowing us the opportunity he said ‘Word that’s what’s up, I appreciate it’,” Esoon said mimicking the legendary rapper’s iconic voice. “We asked him if he had any advice for us in our careers, he said ‘just never stop’.”  The group would soon drift apart from being Pensoulzinakup, but they stayed close friends and are all involved in the music business in some fashion.

Emmai would go on to get a bachelor’s degree in Liberal Arts from the University of Pittsburgh, but he fell into a deep depression and became homeless.  His bounce-back came from getting a job as a doorman at the Shadow Lounge. Justin Strong, the owner of the club gave him opportunities to expand his horizons.  “He gave me an opportunity to see what entrepreneurship looks like,” said Alaquiva. “He showed me the struggles, the good times, and community impact.”

One day, mail was delivered to the lounge instead of to the tenant who lived above it. Emmai was asked to take it up and he realized the room was unoccupied. He had been planning for a year and a half to create his own studio, located in the basement of the Shadow Lounge but the rent had gone up for it.  He changed plans and with Supa C cosigning and the rental of music and recording equipment he bought the studio space in 2001. The studio was named YaMomzHouse, it paid homage to Emmai’s former recording space with Pensoulzinakup, his mom’s house. “From there on every dollar he made 90 cents was put into the studio,” said Alaquiva.

Cory Gale was the first employee of YaMomzHouse, accepted the head audio engineer job in 2005 and says he’s been a mentor and a big brother to him.  “It was more than just a job or logging into the clock in some hours,” said Gale. “It was like learning from someone who had your best interest at heart.”  In 2007, he started Hip Hop On L.O.C.K., a K-12 afterschool program that teaches kids 13-18 about the music business by creating a mock record label, that teaches them writing, recording, copywriting, songwriting, and marketing.

George “Bubby” Coles, a music artist from Penn Hills, was a part of one of the first classes for the program says the program helped him prepare for life in the industry.  “He told us what to expect from the business,” said Coles. “He gave my group free studio time to create music because he saw our potential, we signed a record deal within a year or two of working with him.”

Emmai was also honing his skills while teaching kids about the industry, he “accidentally” taught himself how to do video production.  “We were hiring and working with a lot of videographers to do videos for the kids in the program,” said Alaquiva. “But they couldn’t tell the story of these kids, the way we wanted to.”  He went to a Best Buy in Manhattan, New York, and bought a Canon 7D camera. He used the camera to produce a show called Waffle Wop, from Carnegie Mellon University’s Waffle Shop and uploaded the videos to YouTube. He was shocked by the praise he received from people.  “People began requesting we shoot videos for their organizations and their companies,” said Alaquiva. “It gave way to a mountain of success for the YaMomzHouse brand.”

He gained his first big partnership with hip-hop group, The Roots, in 2012. His friend Ian Wallace used to work on a project of Questlove’s. He asked if he could shoot two days of an event called ShuffleCulture for free. He went and shot the event with an employee, Jordan Gilliam, and put the video together in a week and uploaded to YouTube.  “They didn’t believe my work, they thought it was pure luck,” said Alaquiva. “They asked me to direct photography for The Roots Picnic, and to this day they still use my footage for sponsorship.”

Emmai won an Emmy for Music Composition and Arrangement in 2007 and was nominated for the series Game Changers with Kevin Frazier in 2014, and his documentary Ghetto Steps in 2017.  Game Changers lost the daytime Emmy to Sesame Street and he’s honored by the nomination alongside them.  “Game Changers was amazing to work with athletes,” said Alaquiva. “To be in the same breath as [Sesame Street] is outrageously insane.”

He credits his approach of creating the most soulful story with the elements given for his success with clientele. He compares his production approach to Jean-Michael Basquiat and DJ Premier.  “Premier is extremely rhythmic and accurate, Basquiat took complexity and try to make it simple,” said Alaquiva. “Those combined is a great melting pot of how I like to tell stories.” 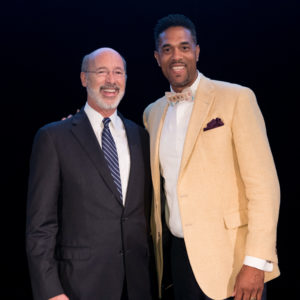 To be appointed to the Pennsylvania Council of the Arts required one of the most rigorous background checks Emmai had ever gone through. It went through every possible angle from financial to legal. If anything raised a flag, he wouldn’t have gotten the seat.  “I always believed in doing things right,” said Alaquiva. “It shows that I’ve been pretty good at keeping a clean slate.”

He’s one of four African Americans on the council, joining one of his mentors, Justin Laing, who has been a member for 6 years.  “Justin is a legend in [the arts] if there’s anyone I want to support or be supported by is him,” said Alaquiva. “I want to push some Hip Hop into the council and give it a ‘little nah mean’ in it.”

Despite the nomination to the council, Emmai is still making moves. He’s working on a documentary on Leon Ford and a piece called Grey Skies, a documentary detailing the similarities between slavery and the Holocaust. He’s also involved in a documentary called 50 Shades of Silence with former WPXI news anchor Darieth Chisolm. The documentary is a part of a campaign to end sexual harassment and cyberbullying.  “I want to change people’s lives through the arts,” said Alaquiva. “It wasn’t an easy journey, but it’s a journey I never gave up on it.”