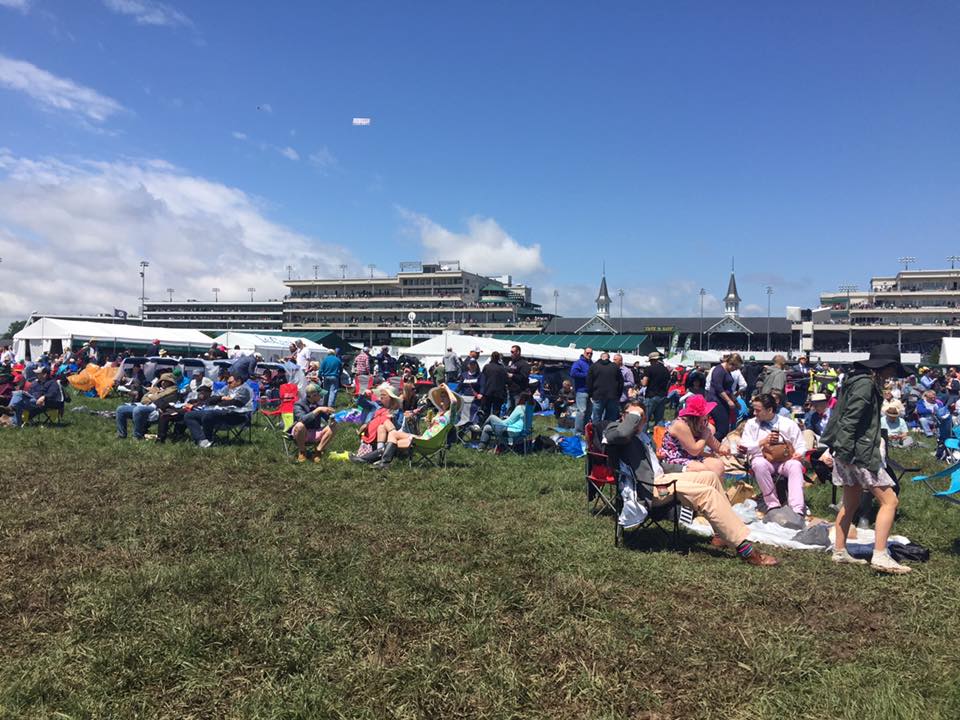 The Kentucky Derby takes place the first weekend in May and is only a 6-and-a-half-hour drive from Pittsburgh—totally doable for a weekend trip.

Having always wanted to venture to Derby City, even with minimal knowledge of horse racing, here’s how this Pittsburgher fared during the celebration of the “fastest two minutes in sports.”

Save some dough and stay in Cincinnati

No surprise that Louisville hotel prices sky-rocket during that particular weekend, so in order to save some money, consider staying in Cincinnati, Ohio, which is only a two-hour drive to the Derby.

We stayed in the Clarion Hotel in Sharonville, which includes two pools (one indoor, one outdoor) and a bar/restaurant attached. Naturally, the pool wasn’t open on that rainy weekend. If you’re hoping to get late-night eats and drinks at the Over Under Bar, you should probably look elsewhere, as it closes at 10 p.m.

The hotel is just 20 minutes from Downtown Cincinnati (think Cranberry to Pittsburgh), and we decided to do the touristy thing and partake in some Cincy grub.

Fries on Salads? Chili on Spaghetti? 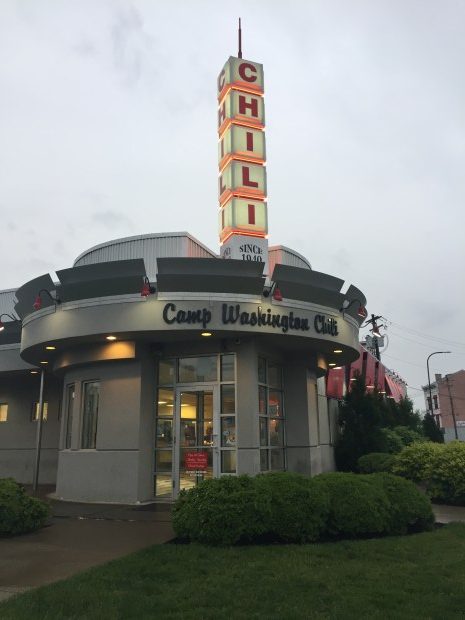 We ventured to Camp Washington Chili in the Camp Washington Neighborhood, a old-school diner-style joint that’s been in business for than 70 years. There are many places to enjoy Cincinnati chili, but this one may be the most iconic. I opted for the three-way chili, which was quite perfect on the rainy, cold Friday evening.

The chili was unlike most concoctions I have tasted in that it had hints of cinnamon and chocolate. 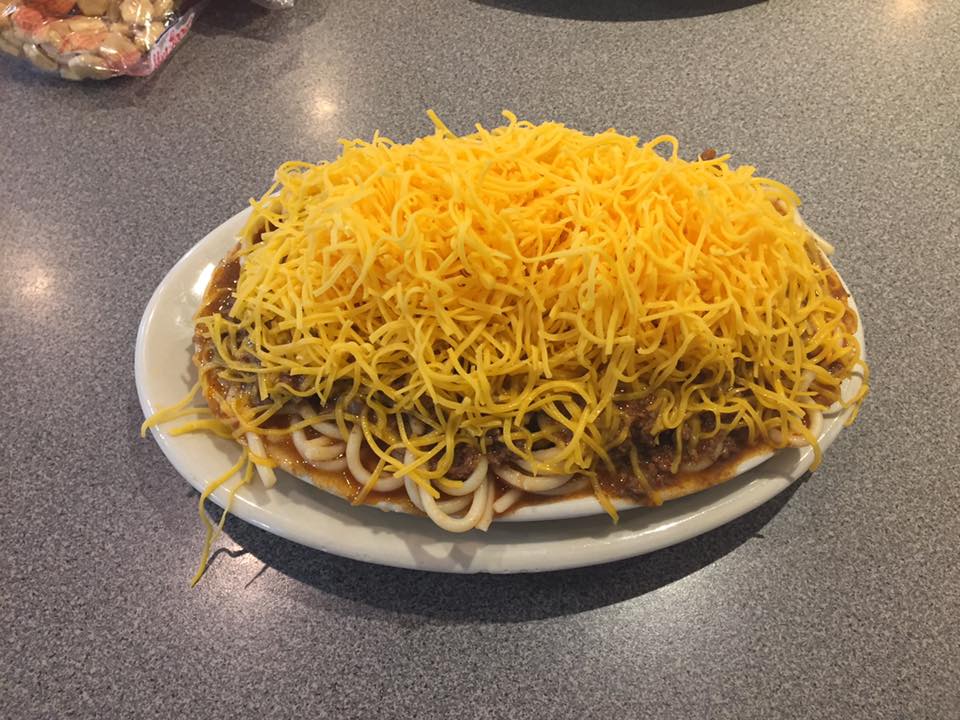 After dinner, we headed over to Urban Artifact in the Northside neighborhood to grab some craft beers and listen to Cincison salsa band perform. The church-turned-brewery definitely felt like something you’d see in Pittsburgh, with a youthful vibe reminiscent of Lawrenceville. 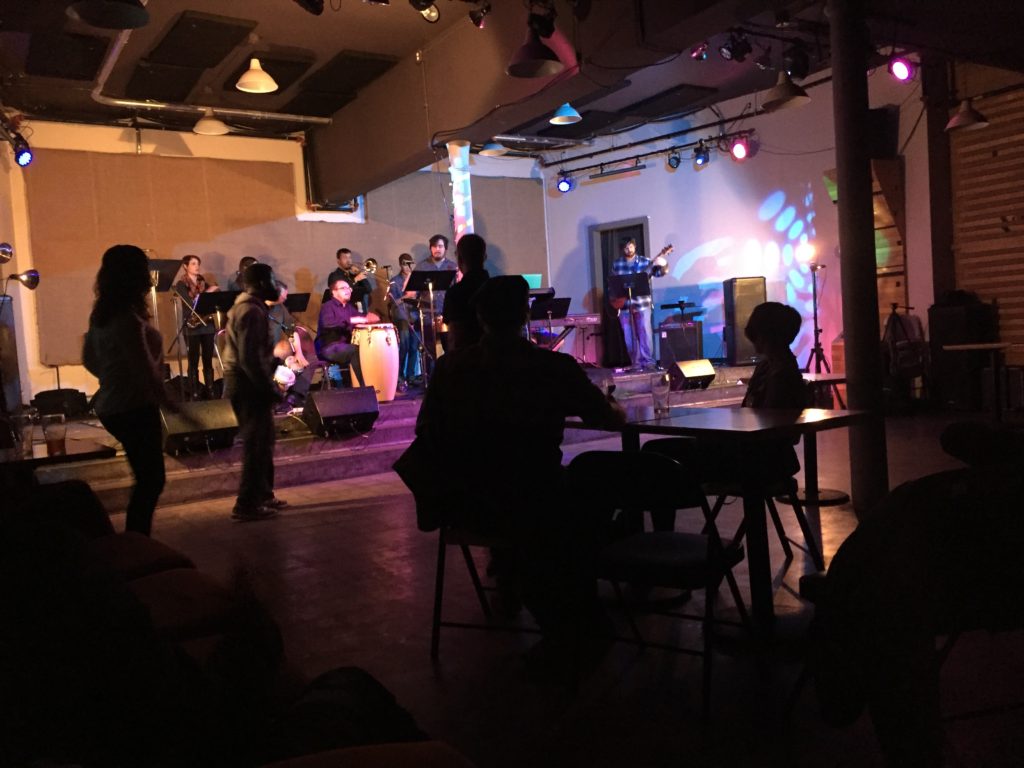 Before Derby Day, people will stay up the night before to prepare to get the best seats/grass spot to take in the action, sprinting to get the best spot when doors open at 8 a.m. But we took a two-hour drive to get there around noon, right when the sun was finally shining, even if we prepared for the inclement weather with layers. 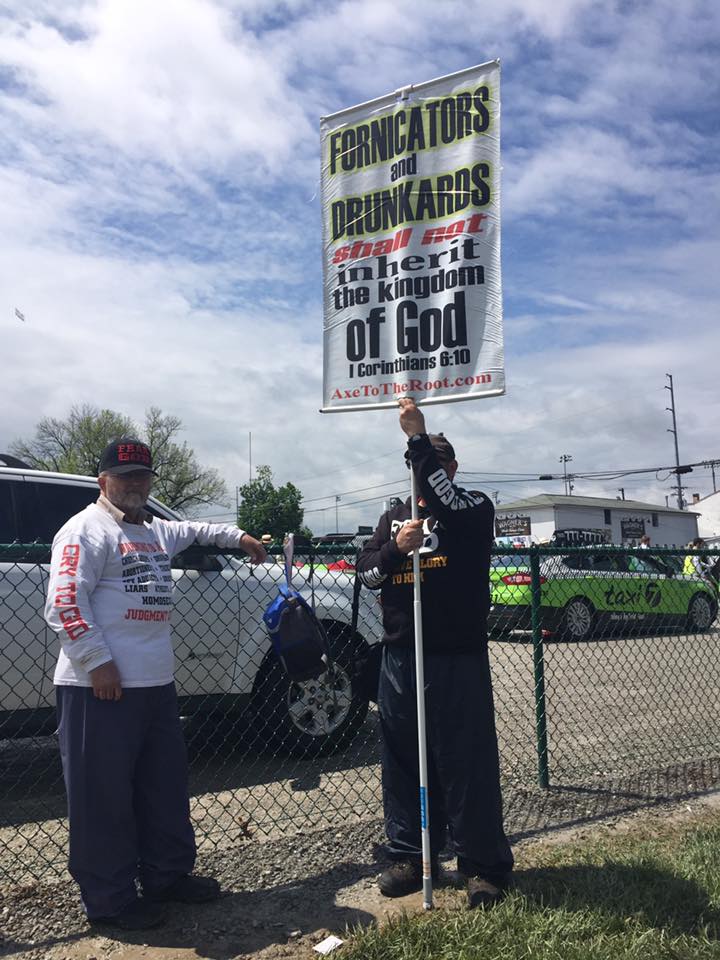 After parking at the University of Louisville Papa John’s Cardinal Stadium, we walked across the bridge to head toward Churchill Downs. En route, many religious zealots spouted off end-of-times messages and handed out pamphlets about seeking help, on a street I like to call Religious Row, as we were bombarded with Bible verses and guilt.

Regular admission is the way to go when it comes to purchasing tickets, which allows you entry into the infield, and the earlier you purchase them, the cheaper. Since we purchased our tickets at the last-minute (literally two nights before the event), it was $75 each. Really, you’re paying for the experience of the Kentucky Derby itself, as you won’t see much of the horse racing action (unless you get close to the fences). 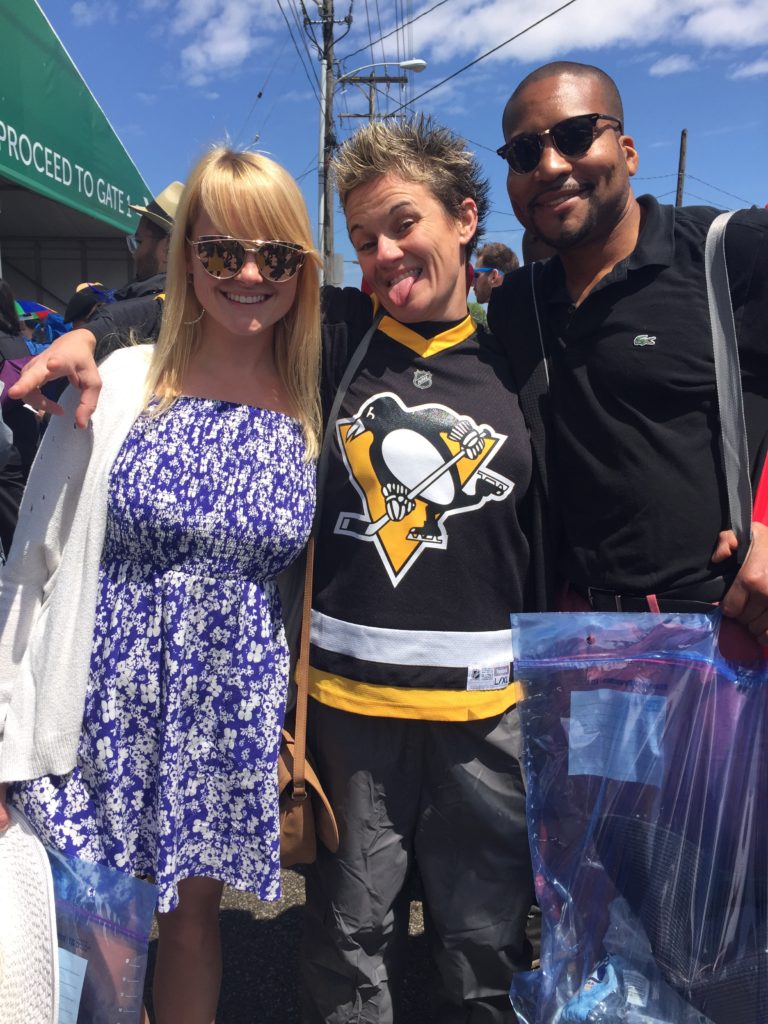 While we were in line to enter the Derby, we met a woman named Nikki, who was wearing a Penguins Malkin jersey, which immediately caused us to strike up a conversation. Nikki, as well as the friends and family she was meeting at the Derby, had familial connections to the Steel City, and like any neighborly Pittsburgher, she invited us to hang out at her tarp, located below the jumbotron. One of the top Uber drivers in Pittsburgh was also part of this party.

“Last year, we had to run to Buffalo Wild Wings after the Derby to watch the Pens game,” said Jen, Nikki’s cousin. This year, there were plans to listen to the Pens-Caps playoff game in the car on the radio, on their way home from the Derby.

As we passed through the Gate 3 tunnel, Nikki started the chant, “Here we go, Steelers” and whatdoyouknow, lots of people joined in.

Do Your Own Derby

Our goals were simple: Wear big hats and sip mint juleps, which is probably everyone’s goal at the Derby (besides staying in control of your drinking so you can remember the day).

We had to venture under a tunnel, toward the hoity-toity side of the Derby to get mint juleps in commemorative glasses (plastic ones were available on the bourgeoisie side), and shortly after, we met with two buddies from Lansing, Mich., who told us tales of Derby’s past, including an unfortunate bout with ticks after passing out in a kilt and not waking up until the Monday after the contest. And if you want to sneak in bourbon, wear a vest.

There was much to explore around the Churchill Downs, including the paddocks area where the horses parade. There was also the Kentucky Derby Museum, which while closed during Derby Day, did offer a gift store for making purchases. The Bourbon Balls are a must-purchase, which look like buckeye chocolate treats, only with rich bourbon (eating all four may elevate your blood alcohol level above the legal limit).

The event was also perfect for people watching, whether it’s for the fashion (the hats and dresses!), the guys all dressed like Colonel Sanders (in fact, a Colonel Sanders impersonator was even in attendance), or the

Place Your Bets (Even if They’re Small) 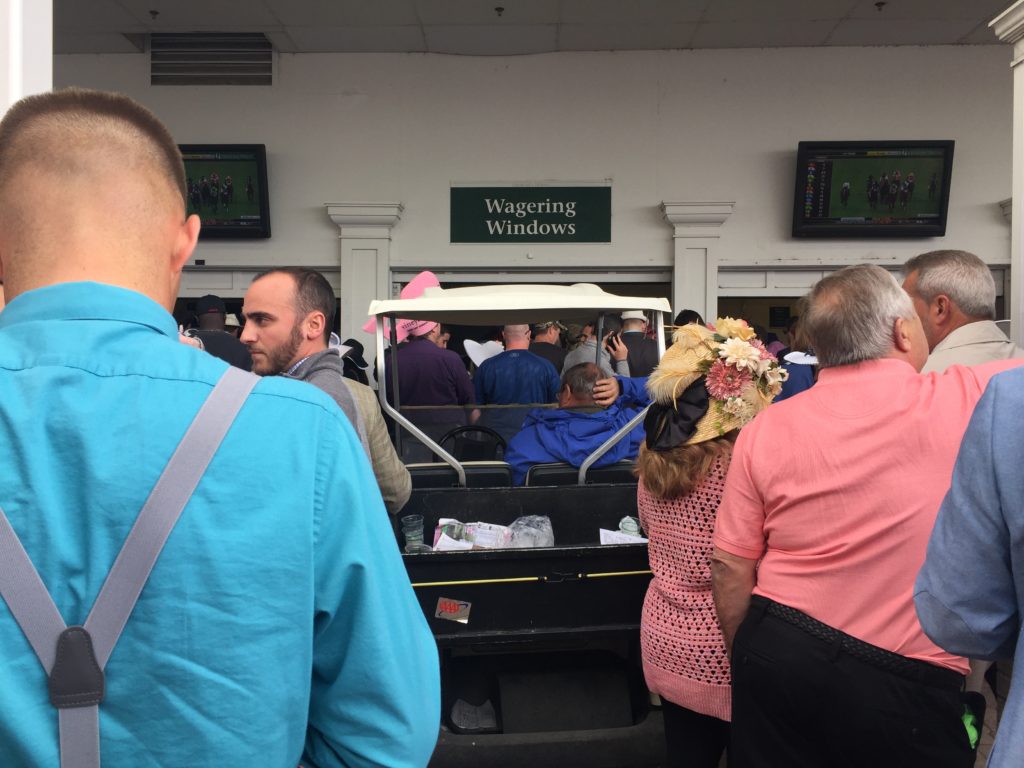 Even if you’re not a big gambler, you can place a bet for as low as $2. We put our money behind the Underdog of the event: Patch, the one-eyed horse who has his own Twitter page.

We talked to Willy, who helped us manage our bets at the one of the waging windows, and he told us that Patch was a popular one that day, as many people had fallen for the story (suckers like us).

We were advised to get our bets in early because around 5 p.m., everyone would be scrambling before the actual Kentucky Derby, which would take place at 6:45 p.m.

Kentucky may seem far away from Pittsburgh, but it’s actually a lot closer than you think, both in culture and proximity. As residents of a “sports town”, every Pittsburgher should consider taking part in this tradition at least once.