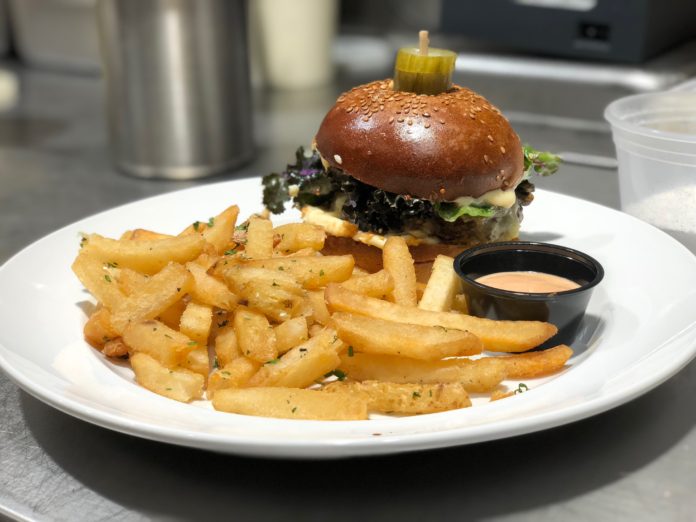 Asking someone to choose their favorite – or even ultimate – burger is often more difficult than asking someone to choose their favorite child. Luckily for me, I only have one child, so she’s definitely my favorite. Comparably so, there is only one burger in my eyes that can be dubbed as the ultimate. A burger so remarkable, it needs no other name besides: The Burger. 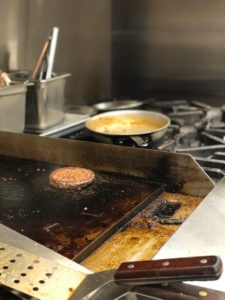 The Burger is the creation of Chef Stephen K. Eldridge of Provision Restaurant at Pittsburgh’s Federal Galley. Recently, I was lucky enough to visit the kitchen of Provision and witness the behind-the-scenes construction of The Burger from start to finish. The next day, I was telling my friend about my experience. He asked, “What’s so great about this burger anyway?” and within moments I was geeking-out about the perfect bun-to-patty ratio, the umami flavor of the mushrooms, and the fact that every single bite makes it into your mouth without a sloppy pile of mess left on the plate. My mouth was watering just talking about it again.

When you order The Burger, it’s easy to see that you’re about to indulge in a delicious-looking burger. But what will really have you craving this burger for months later is the story: the thoughtfulness, the attention to detail, and – most importantly – the perfect balance of flavors and textures. Once you experience the whole package, you’ll understand exactly what I mean.

Chef Stephen has dedicated years perfecting this masterpiece, yet when asked about how 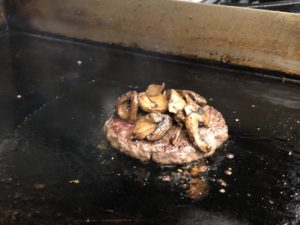 it came to be, he humbly replied, “I just like a good burger.” As do we, Chef. The trouble is, burgers have lost their touch lately. It seems as though most are greasy, messy, tough, and either over-dressed or under-seasoned. That is not the case with this burger. Here, each component is well thought-out and executed to perfection.

It starts with an all-beef patty on the griddle that Chef Stephen generously seasons with salt. Just salt. No pepper, as he wants the natural flavor of the beef to shine through without overpowering it with too many seasonings. Next, he spoons some sliced mushrooms next to the burger patty to warm up. These are no ordinary mushrooms, mind you. These little beefy beauties have been through a 3-step rehab program of deliciousness. First, they are roasted in the oven, then they are smoked, and they are soaked in a delicious marinade until it’s time to top the burger. They smelled amazing the moment that they hit the griddle and at that very same moment my stomach started growling. 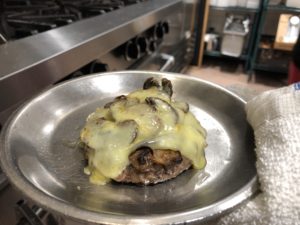 While the burger was sizzling away, we turned our attention to the bun and the rest of the toppings. When is a pickle not just a pickle? When it comes from the mind of Chef Stephen. He kisses a dill pickle with a hint of cassia (Chinese cinnamon) which adds the perfect little kick to make your palate pucker before taking a bite of The Burger. He skewers a few pickle slices and sets them aside for burger stabbage later.

Next, he spreads a thick layer of aioli on the top and bottom of the toasted sesame bun. Aioli is simply another name for a garlicky mayonnaise, unless you’re referring to this aioli which also contains tamari and nutritional yeast. If you’re like me, you probably made a weird face when you heard “nutritional yeast.” So, Chef Stephen grabbed a spoon and let me take a taste of some flakes, which were surprisingly delicious! Nutritional yeast has a nutty flavor that pairs perfectly with the tamari and the creaminess of the mayo. 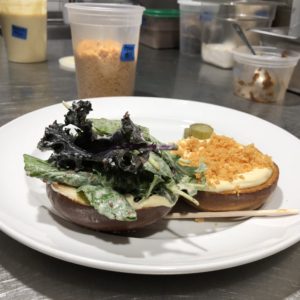 Following the layer of aioli on the bottom bun is a sprinkle of crispy parmesan crumbs for texture and a salty kick. Those paired with the smoky mushrooms almost mimic bacon as your teeth sink into the burger. In a small bowl, a handful of hearty greens (hearty being the key word here, kids; no one likes greens that immediately wilt on a hot burger patty) are mixed with a liberal amount of tangy roasted shallot whole grain mustard dressing.

Did you forget about the actual burger already? I hope not! At this point, it was cooked to a perfect medium (because no self-respecting burger eater should ever order more than medium, anyway) and ready to be topped with those yummy mushrooms and a thick slice of organic Amish white cheddar cheese that Chef Stephen gets from Ohio. (Did I mention that I was tasting everything along the way? I think I squealed when I tried the cheese. Granted, I love cheese in general, but this particular one is stupid-good.) The burger-mushroom-cheese stack headed to the broiler to get bubbly for a moment, then made its way to the dressed bottom bun. The top bun, piled with the hearty greens, was gently placed on top and the whole thing was finished with a stab of that pickle skewer. I was ready to dive in… but I had forgotten about the fries!

Cozied up next to The Burger is pile of hot crispy fries that, just like every other component on this plate, has been taken to the next level. These special spuds were first blanched in a water bath, then fried in oil on a low temperature to transform the center of the fry into creamy potatoey goodness, and lastly fried in oil at a higher temperature to obtain that crispy outer texture that we all crave in a fry. While still hot, Chef Stephen tosses them in a mixture of ground salt, vinegar powder (dude… seriously… it’s so ridiculously good), parsley, and fresh rosemary. My favorite part about the fries? They aren’t served with ketchup. They come with a side of their secret fry sauce that has a bit of confit onion and other mysterious goodies. Why have a condiment that also has numerous steps and more love added to it? Because, it’s way better than just ketchup and Chef Stephen knows it. He said, “We don’t just cook something and put it on the menu just because we think it’ll sell. We cook things that taste good. It has to taste good.” That attitude shines through during every bite of this burger. 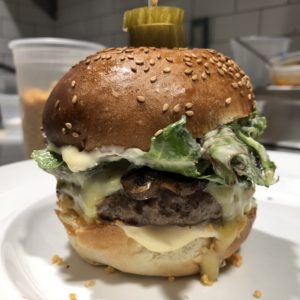 The Burger can easily fill your belly and your heart well on its own. But, while you’re at Provision… order the beets and the pancakes too. Trust me, you’ll thank me later!