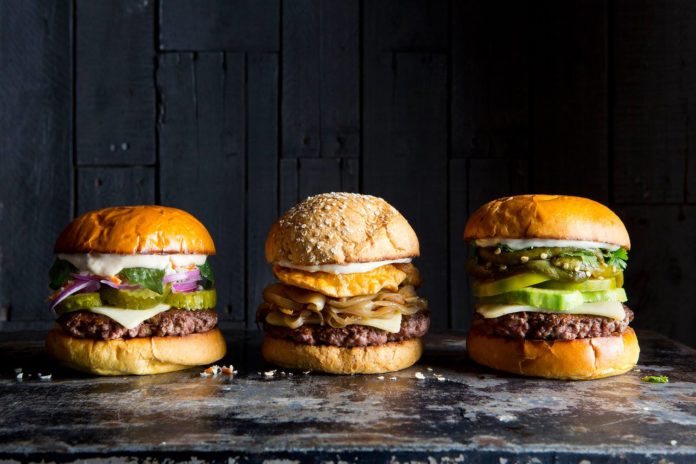 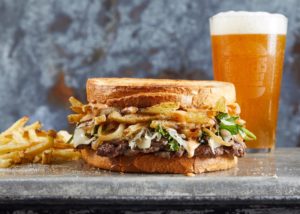 The long, wooden bar at Burgh’ers Brewing in Lawrenceville once stood on a Butler County golf course.

“This whole place was built sustainably,” says owner Fiore Moletz, adding that the tables in the restaurant also are remnants of fallen trees. 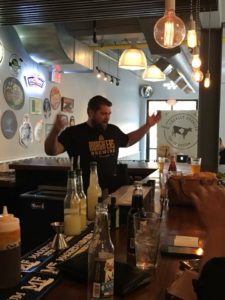 The Butler Street eatery, along with its counterpart in Harmony, PA, has a gold certification from Sustainable Pittsburgh Restaurants; a program that champions eateries to lessen their impact on people, the environment and the region.

While doing his part to save the planet, Moletz still manages to churn out some of the best burgers in town. Last September, the James Beard Foundation named the joint’s Fox Chapel burger – a patty with a 75-25 blend of grass-fed beef and roasted mushrooms topped with goat cheese, pickled red onion, avocado, spring mix and a balsamic glaze – one of five winners in its annual Blended Burger Project. More than 350 restaurants competed in the event. 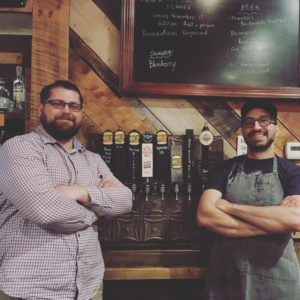 “We have a lot of competition,” Moletz says. “It needs to be perfect. We have to have the best meat, the best buns and the best sauces.”

The Shaler native grew up in an Italian family that believed meals should be made from a few fresh, ingredients and a lot of love. He worked in kitchens at Il Pizzaiolo and Lidia’s Pittsburgh, learning from a series of masterful chefs.

Pasta was his passion. And then he ate a hamburger in New York City.

In 2009, he opened Burgh’ers in Harmony, to bring that thin, crispy NYC-style sandwich to Butler County. (He didn’t abandon his roots though: Moletz also runs Della Terra Italian Bistro located next door.

Both restaurants are soon moving to bigger digs on Zelienople’s main drag.) 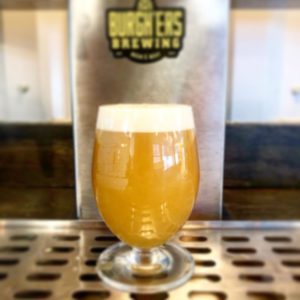 The Lawrenceville Burgh’ers opened in 2017. The place exudes Pittsburgh pride, from its black-and-yellow color scheme to the names of its menu items.

Then they can wash it down with a Penn Ave. Pale Ale or a Jack Rabbit Double IPA.

Burgh’ers specializes in beef and beer.

Head Brewer Neil Glausier, an engineer by trade, whips up batches at a facility in Zelienople. Moletz says he’s planning to open yet another Burgh’ers that will be big enough to brew beer on site.

“Sometimes,” he admits, sipping a Saison Michelle, a beverage named after his wife. “I’m really excited. We have an unbelievable staff. We’re just doing what we do.”