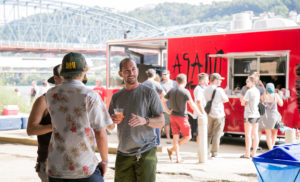 “This is hands down the best DJ lineup I’ve seen in Pittsburgh in the last decade,” he remarked, when we sat down to chat. He – Adam Kulik, better known as DJ Nugget – has been an integral part of Pittsburgh’s DJ scene, and is the man behind the DJ owned and operated club The Goldmark in Lawrenceville, the “Cheers” of the steel city’s DJ culture – both old and new.

The lineup he’s referring to is that of the 3rd Annual Crosstown Cookout, which has been a bit of a sleeper success over the past two years. The event isn’t held in any well-known music venue, or obscure East End warehouse space, but in a much-underutilized area of the downtown Pittsburgh riverfront known as the Mon Wharf.

The event was conceptualized in 2016 by Sara Lynn Ruth and Laura Early, founders of Pittsburgh-based marketing agency Fame15 Creative. In years one and two, mainly by word of mouth, the event drew thousands to the vast concrete space along the river, located underneath the parkway and Fort Pitt Boulevard. This urban landscape has surprisingly seen few events, despite its unique weather-proof setting and central location. Fame15 saw the potential of the space and worked with the city and Riverlife to bring the event to fruition. Seeing the event’s further potential, Derek Burrell of Round Corner Cantina contacted the pair to discuss additional growth in 2018.

The trio, along with many influencers rooted in the 412 music scene, brings the Crosstown Cookout back again to the Mon Wharf in 2018. Likening the growth to sprinkling water on a Gremlin… this year’s Cookout will break the mold for “day parties” and “Sunday Fundays”. The biggest addition? A robust national lineup headlined by A-Trak – globe-trotting party monster and owner of hyper-cool Fools Gold Records which broke Chromeo, Danny Brown, Flosstradamus, Kid Cudi, Run The Jewels, and about 3 dozen other acts that, if they aren’t on your must-see list, you better add them. DJ to Kanye West since 2005, A-Trak is one of the most decorated and acclaimed DJ talents of this generation.

“For most DJs, waking up on Sunday is the equivalent to a normal person’s Friday afternoon happy hour. That being said, when there’s something special going on on a Sunday afternoon in Pittsburgh, you gotta take full advantage,” says Nugget.

Taking full advantage, Nugget, in tow with some of the city’s best and well-known DJs: Big Phill, Selecta, Bamboo, Yamez, Jx4, alongside glowing newcomers DJ Femi & Seams will be featured on a 2nd B2B stage curated by Make Sure You Have Fun, hyper-relevant party promoter extraordinaire, in partnership with Spirit Lodge.

Big Phill – an OG in the game – grew up in Penn Hills within walking distance of other legendary local DJs including TK, DJ Assassin, Supa C, and Sean C.  “Never has there been an event to gather this much talent in one space,” Phill remarked, “and I am eager to see what everyone is going to do that evening.”

Of course, the core of the event is still there… bringing people from across the city to party by the river, enjoy some of the city’s best food trucks, enjoy summertime cocktails and draughts, and of course to support Riverlife’s mission.

“Since one of our goals is to bring more people to the Mon riverfront, it was a natural fit to be partners and we’re looking forward to being a part of the Cookout this year,” says Stephan Bontrager, Riverlife’s vice president of communications and outreach.

In partnership with the City of Pittsburgh, Riverlife helped create a linear park and trail along the Mon Wharf. The Mon Wharf Switchback, a bicycle/pedestrian ramp connecting the Smithfield Street Bridge to the Mon Wharf is currently under construction. The ramp will be ADA accessible and fully lit at night. Guests of the past two Cookout’s have been able to see this highly anticipated project progress.

The event will be held this year on Sunday, August 12th from 2PM-11PM, rain or shine. (Although we are hoping for SHINE!) Tickets can be purchased at crosstowncookout.com. General admission tickets are $20 ($25 at the door). VIP tickets are available for $60 ($75 at the door) and allow exclusive access to the VIP area hosted by Creatives Drink which features stage access, an additional bar, additional restrooms, and a shaded lounge.