If you’re in the mood for a good meal and a good beer to wash it down with, head to Hop Farm Brewing Company in Lawrenceville. 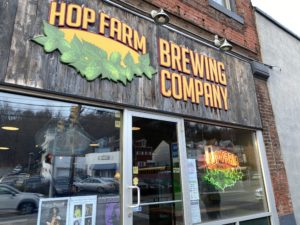 Owner Matt Gouwens offers some seriously quaffable liquids made with homegrown hops and, since August, his kitchen has been churning out eats from Provision PGH. Executive Chef Stephen Eldridge and his wife Susan Cope also run the restaurant concept at Federal Galley.

The menu is a hit with foodies who flocked to the spot when it debuted at Smallman Galley in the Strip District. In 2017, they followed their noses to its current North Side location.

Eldridge’s upscale American eats keeps ‘em coming back. The signature burger (called simply The Burger) is topped with cheddar, parmesan fries, greens, umami aioli, smoked mushrooms on a sesame seed bun. You can throw a dippy egg on it for an extra $2. Pair that with a side of triple-cooked fries and house-made sauce and you’re golden.

The couple will run the incubator location for another year and then focus their attention on the big things on tap at Hop Farm, where Chef Mike Saffron helms the Provision PGH kitchen.

The tiny Butler Street taproom is expanding to the neighboring building, giving Gouwens and Eldridge 7,000 square feet to express themselves through food and beverage. Beer production and general revelry will increase. Customers can even party on the roof, which will have seating and a garden.

The new and improved site – complete with an overhaul of the current taproom and the upstairs music venue – is expected to be completed by next fall. The menu also will see some changes.

The seeds for a Hop Farm-Provision collaboration were planted five years ago.

Since opening his operation in 2013, Gouwens was the king of multitasking: he made the beer, ran the kitchen, dealt with sales and deliveries and was the first to can his libations. 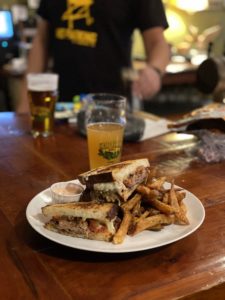 He was passionate about food and wanted Hop Farm to be a go-to place for grub, but he was spreading himself too thin. He needed a like-minded partner with a penchant for cooking.

Gouwens met Eldridge at a Smallman Galley event held at the brewery.

“I like his beer and he likes my food,” Eldridge says. “It’s a good relationship.”