What follows is the first in a series of video collaborations with chefs.cloud, a Pittsburgh-based platform that helps people discover food based on what they’ve liked in the past. LOCALpittsburgh is partnering with chefs.cloud to present a series of articles on Pittsburgh food alongside chefs.cloud-produced cooking videos with local chefs. First up is Station’s Curtis Gamble making a “Corned Beef Tongue.”

If you scan the Instagram, Twitter, or Facebook feeds of Station co-owner and chef Curtis Gamble, you could easily argue that Gamble is one of the more outspoken local chefs. Amid photographs of gorgeously prepared food are truth bombs about the life of a chef, conversations about the true cost of food, and rhetorical questions directed toward the continuing influx of new restaurants in a city that continues to maintain (read: not grow) its population. While these posts may be limited to 280 characters, these topics are part of a necessary conversation–a conversation about all of the elements of the restaurant that lead to that exquisite dish that a diner may receive on a Friday night.

The “celebrity chef” phenomena may be one of the only examples where a trickle-down system works. The popularity and household name recognition of Alice Waters, Anthony Bourdain, Emeril Lagasse, Paula Dean, and others have created an era where chefs, in general, are celebrated as creative forces, and through the pervasive use of social media, chefs are provided a platform to generate discussion, if they want to.

This platform allows for a new type of transparency into the logistics of running a restaurant, and that drive for transparency is part of a larger trend in Pittsburgh. In recent years, the Good Peoples Group developed the 86 Conference to discuss issues of racism, sexism, and power dynamics in restaurant culture, Wigle Whiskey spearheaded the collaboratively developed Three Day Blow food writers conference and Tipped Off recently hosted a panel discussion about wage options for restaurant workers. These formal events are happening alongside the daily tweets and ‘grams from restaurant owners and employees. Restaurant goers now have unprecedented access and knowledge of the venues where they choose to spend their dollars.

Personally, I like this peak behind the (kitchen) door. Knowing more about where my food comes from and the labor that it takes to create it expands my appreciation for what I’m eating and for the people making and serving it.

Station is a good example of a grounded restaurant, one that celebrates both the effort to create food and the actual creation. There is an art to Station’s menu, a care that is exemplified in the above cooking video of the restaurant’s “Corned Beef Tongue.” 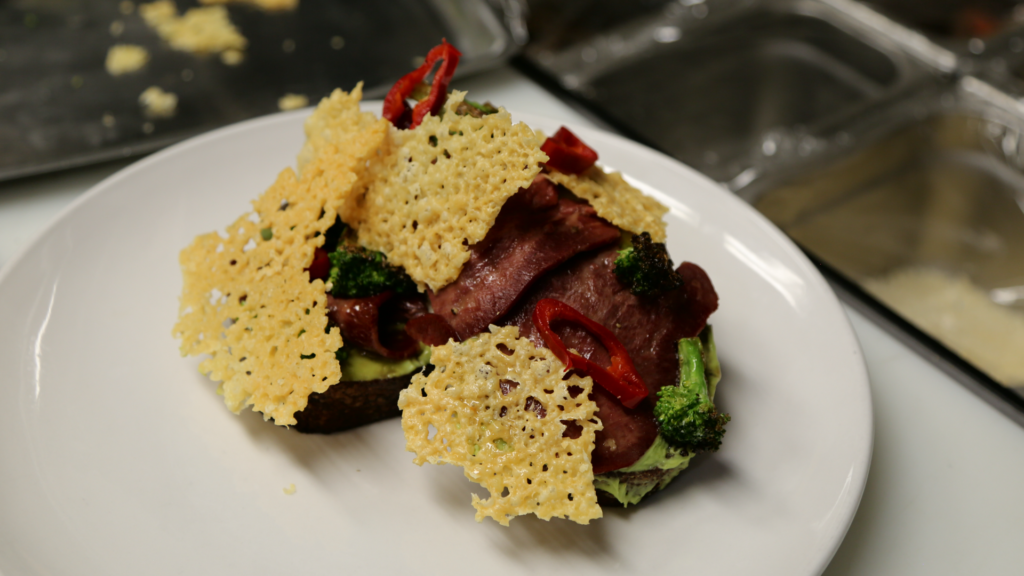 Beef tongue is brined for seven days in a pickling spice and then heated in a rich veal reduction with sherry and butter. The beef tongue is placed on a slice of fried bread covered in a broccoli and cheddar cheese spread and finished with pickled Fresno chili peppers, roasted broccoli, and crispy cheddar cheese.

The dish is a play on broccoli and cheddar soup, but in sandwich form. And while this dish was a favorite from last summer, Station offers a number of similarly inventive sandwiches during their lunch and afternoon hours, in addition to a seasonal rotation of thoughtfully constructed entrees.

To watch more videos from chefs.cloud, visit their Youtube page.