With about 20 years of experience in the beer industry, Rob Johnson is the new Vice President of Sales and Marketing of Rivertowne Brewery. Rivertowne, one of the very first craft brewers in Pittsburgh, has restaurants in Verona, North Huntingdon, and the North Shore, as well as a Pourhouse in Monroeville. While the brewery is already a city favorite, Rob Johnson looks forward towards many years of continued success.

Have you been in the industry long?

I have been in the beer industry in one facet or another for nearly 20 years now.  My experience started on the retail side of things. I put myself through school behind a bar and worked part-time as the homebrewing contact at Country Wines years ago.

Tell us about what you did prior to joining the Rivertowne team?

I was fortunate enough to win some amateur homebrewing awards and receive the opportunity to study professional brewing under Bryan Pearson at the Church Brew Works from 2000 – 2003, roughly.  The wind blew me in a different direction and I found myself managing the FOH at Sonoma Grille for a bit in 2005.  It was at that point that I realized my true love was beer and I began positioning myself to pursue a career in the beer industry.

In Summer of 2009, my good friends, Mark Burford and Pete Cotter, contacted me with their interest in acting on a proposal that I had forwarded them nearly 2 years before shortly after I brought their brand to Pittsburgh.  They were interested in expanding Blue Point Brewing’s reach southward and offered me a position as their Southeast Sales Manager.  During this time, I relocated my family to Clearwater, FL and rolled out 13 wholesalers in North Carolina, 21 wholesalers in Florida, and hired sales representatives to assist my efforts in both states.  By Spring of 2011, Mark and Pete wanted me to relocate to Patchogue, Long Island to become their National Sales Manager and head our expansion efforts moving forward.

Come Spring of 2014, Blue Point Brewing sold to Anheuser-Busch Inbev and I slid over to Oskar Blues Brewery to become their Northeast Sales Manager.  We had already been in discussion about another position about 6 months before this time.  My time spent at OB was fast and furious as I took on larger roles, continued to help expand the brand, and ultimately integrate the Cigar City Brewing sales team with OB’s sales team in Fall 2017 as the Eastern Divisional Manager before becoming the Sales Operations Manager for a short time.

As fun as the time was spent at OB, it made me realize that I longed to be working with a smaller brewery again.  I was interested in and motivated to have more influence and impact over the direction of a smaller, growing brewery.  Enter Christian Fyke.  Christian and I had known each other for about 16 years and had been working together during my time at Galli Distributing, Blue Point Brewing, and Oskar Blues.  An inquiry uncovered that Rivertowne Brewing and myself both had an interest and need that could be filled.  After a few meetings, we decided to put the plan in action and I accepted the role of Vice President of Sales & Marketing for Rivertowne Brewing.

I believe you have been at with Rivertowne less than a year, what are your thoughts so far?

It’s been an exhilarating 7 months at Rivertowne Brewing.  We have been able to put our plan in place, execute, and turnaround updated branding and new brands to introduce to our fans across PA, OH, WV, and NC in a mere 6 months.  It has been a true team effort with each person knowing and owning their role to make it happen in half the time that it might take on a routine basis.  We have a lot of good people at Rivertowne.

What are your duties for this job?

As the VPSM I am responsible for leading our efforts across branding, marketing, portfolio composition, sales management, wholesaler management, business planning, and ultimately increasing overall profitability.  But it doesn’t stop there.  If we come across a situation with which I have previous experience, I am always happy to provide input.

Rivertowne was one of the earliest local craft brewers in Pittsburgh, what’s next?

It’s onward and upward for Rivertowne Brewing.  These recent changes are merely the beginning as we will continue to search for angles and execution which benefit the greater good of our company.  A constant state of evolution is necessary in any business sector in order to stay competitive while also being light on your feet.  For starters, we will begin offering some brewery exclusive 16 oz packages.  It’s always a benefit to get people to your brewery firsthand to discover what you are all about.  I find that they are frequently surprised.

It seems new breweries are popping up daily, is there an industry bubble?

I suppose that there is a proverbial bubble.  I would also guess that the effects of oversaturation are specific to each market given their differences.  It was predicted a few years back that the “hyper-local” model of building a smaller brewery and selling a limited package to go would be a more sustainable model in the short term than the previous model of building a relatively larger brewery and placing your beer on many store shelves across various states.  I think that we are seeing that strategy in motion across the U.S.  I’m simply happy that there is more fresh beer to drink than ever before.  Differently sized breweries can find success in the same space.  It’s really about capitalizing on what you are built for and letting the chips fall where they may. 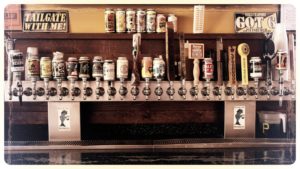