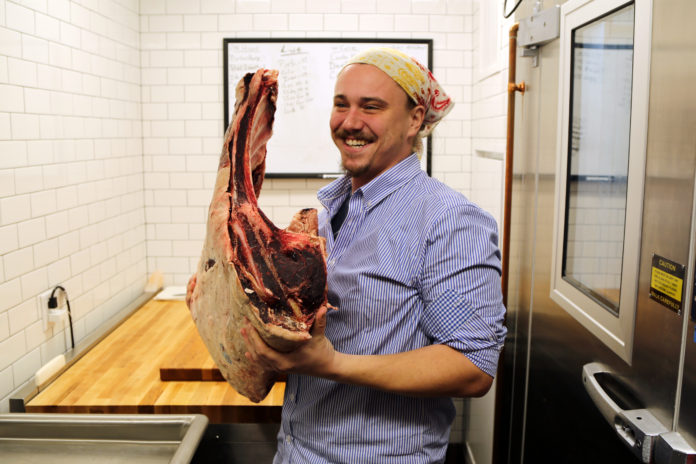 Tucked in the corner of or, The Whale, the second of two new restaurant concepts from chef and owner Dennis Marron, is a glass window revealing racks of carefully aging meats — the Flintstone-esque Tomahawk rib-eye and a selection of other rib loins.

Like Marron’s Jersey shore-inspired Merchant Oyster Co. in Lawrenceville, complete with barside oyster shucking and a yacht rock soundtrack, or, The Whale, located downtown in the Distrikt Hotel, takes inspiration from Marron’s youth.

“I grew up in New Jersey,” says Marron. “If you were going to a fancy dinner, it was either a big seafood house or a big steakhouse. My first job was in a place called “Hook, Line, and Sinker,” and right next door was a place called “What’s Your Beef.” So, marrying the two always made sense to me. Who doesn’t like surf ‘n turf?” 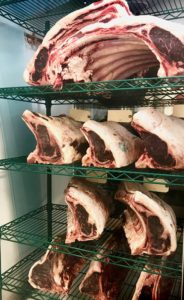 For much of its meat program, the restaurant uses a dry aging approach. The origins of dry aging extend back through time, generally visualized as hook-hung animals. An Annibale Carracci painting from 1583, “Butcher’s Shop,” shows a range of meats hanging from the shop’s joists. Starting in the 1960s, dry aging was eclipsed by wet aging, a short-term vacuum-sealed aging technique that arrived with advancements in plastics.

Like fermentation and other preservation techniques, dry aging is a type of controlled decomposition. Depending on the type and size of the cut, the restaurant ages meats between 28 and 55 days at a temperature between 32 and 35 degrees Fahrenheit in a well-ventilated refrigerated case. Butcher Timothy Riesmeyer clarifies, “The temperature preserves the integrity, but the fan actually does most of the work.”

“There are three factors that you take into consideration with dry aging: juiciness, tenderness, and the flavor,” says Riesmeyer. “We’re all very fluid beings so whenever you slaughter an animal that flow stops. Natural enzymes stop moving and begin to attack the animal’s muscles, breaking them down. During that breakdown period, the flavor becomes more concentrated. The longer the enzymes work on the muscle, the more tender the meat becomes.” 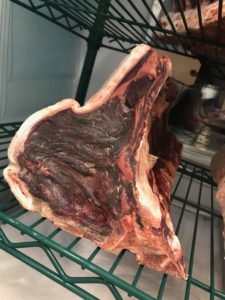 The reduction of juiciness and loss of weight due to moisture evaporation can be replaced with fat during the cooking process. “That’s why you want to age a well-marbled piece of meat so as it’s cooking, the fat renders and makes up for the moisture lost [in the aging process].”

Dry aging presents a challenge to taste buds predisposed to years or decades of standard steaks. “I wouldn’t say the flavor is funkiness, but more popcorn; a buttery, nutty flavor.” Insidethe small butchering room, Riesmeyer pulls out a hunk of dry aged beef and pushes it to my nose. Popcorn, indeed! “Yeah, isn’t that crazy,” laughs Marron.

Sourcing also contributes to that taste. For years, cuts from grain or oat-fed animals contributed the majority of restaurant steaks. Now with many local farms dedicating time and land to grass-fed beef, restaurant-goers’ palettes are changing. “When we [chefs] first started sending out grass-fed, grain-finished steaks, the public was taken aback by the flavor, because it’s more earthy and intense,” says Marron. “Only now are we getting to the point where everyone is ok with the taste of a completely grass-finished steak. That took about ten years.”

A good way to ensure a quality product is to work with a local farmer or supplier. Not too long ago, acquiring local meat meant that you had to buy the whole animal. Buying the whole animal essentially required an in-house butcher and plenty of cooler space to store and age the meat. In 2012, Neal and Cheryl Salyards acquired Bedford County farm Jubilee Hilltop Ranch, and recently began offering primals–large pieces of meat, separated from the animal carcass during butchering–which allowed more restaurants to serve local meat.

“A lot of this grass-fed beef idea falls into the same category as someone saying they have free-range chickens, which only means that the chickens aren’t caged their entire life,” says 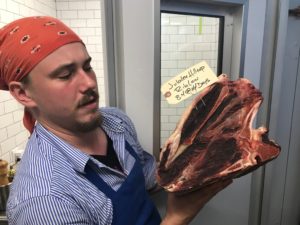 Riesmeyer on the flexible nature of buzzwords in food. “But Jubilee Hilltop’s animals are entirely grass fed. Neil runs a hydroponic grass program that allows him to grow grass to supplement what is available on pasture throughout the year.”

At $125, the 35oz Bone in Dry Aged Rib Eye is not cheap, but the reason for the high price tag takes into account the labor required for each step of the dish from the birth of the animal to the cooking of the steak. Humanely-raised, grass-fed beef costs more than factory-farmed animals. The dry aging process requires skill, equipment, and most of all, time.

“You’re paying for the time. The meat came in. It was salted, turned, and then hung,” says Riesmeyer.

“From a business standpoint, the investment of sitting on inventory for over a month before we can even sell it–it’s a commitment to make a good product,  ” says Marron. “Our steaks are definitely on the high end, but hopefully, our clientele appreciates the fact that we put the time and effort into making these things, and that our product doesn’t come in pre-done and we slap it in a pan. Everything we do takes time and love and care.”