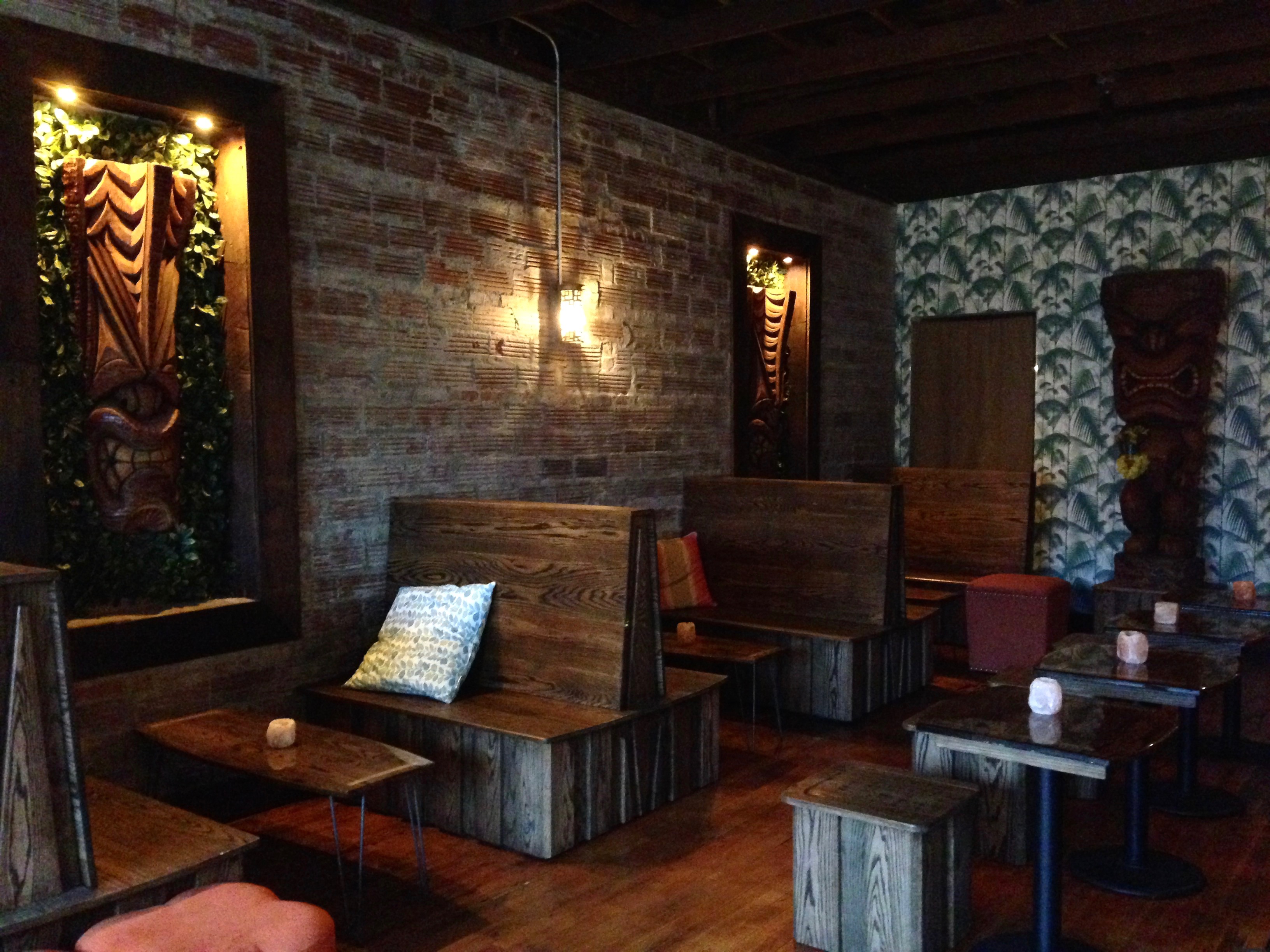 Hidden Harbor, which opened in January of this year, serves rum-based cocktails in a laid back but upscale tiki bar, located in Squirrel Hill on Shady Avenue right next to the craft beer-centric Independent Brewing Company. Both bars are owned by the same people.

As the story goes, Adam Henry, met Peter Kurzweg at Princeton, and the two quickly discovered that both of their girlfriends (now their wives) lived in the same apartment complex at Penn State. When brothers Peter and Matt Kurzweg decided to open a bar, they tapped their friend Adam for his knowledge of cocktails.

Those three distilleries are Wigle Whiskey, Maggie’s Farm Rum Distillery, and Pennsylvania Pure Distilleries, all an easy drive from Pittsburgh. Although the first is best known for producing whiskey, and the last for their Boyd & Blair vodka, the common denominator between all three distilleries is that they produce a rum—hence Hidden Harbor’s tiki theme.

Unlike other tiki bars which often play to a kitschy stereotype, Hidden Harbor’s decor belies a tasteful aesthetic. Before it was a bar, the space was used as a real estate office, though it’s undoubtedly better suited for hospitality: the exposed brick, ducting, and rafters feel less Jimmy Buffet and more Beach Boys. Indeed, Adam, Peter, and Matt weren’t interested in opening just another tiki bar, but a tiki bar of the future.

For those who like the classics, Hidden Harbor pulls out a menu on Tuesday nights called “Tiki Time Machine” that features more traditional tiki drinks. Customers can drink their way through five decades of tiki tradition, starting in the 1930s with the Nui Nui (Virgin Islands rum, lime, orange, cinnamon, vanilla, allspice, and bitters, $10) and working their way to the 1970s Painkiller (Jamaican rum, lime, orange, pineapple, and coconut, $11).

However, it’s Hidden Harbor’s molecular gastronomy menu that we find the most interesting: every Wednesday night, the bar gets experimental, using a variety of scientific techniques to craft cocktails that look straight out of 22nd century Bikini Bottom. Their mojito, for instance, features mint that has been flash frozen with liquid nitrogen and ground into a fine powder that melts on the tongue. The program is young, but according to Adam Henry, the bar also plans to make good use of their cotton candy machine.

When was the last time you visited Squirrel Hill and had an island-inspired rum drink with flash frozen mint under the watchful eye of a several thousand pound hand-carved tiki statue? Your answer is never. Get there.