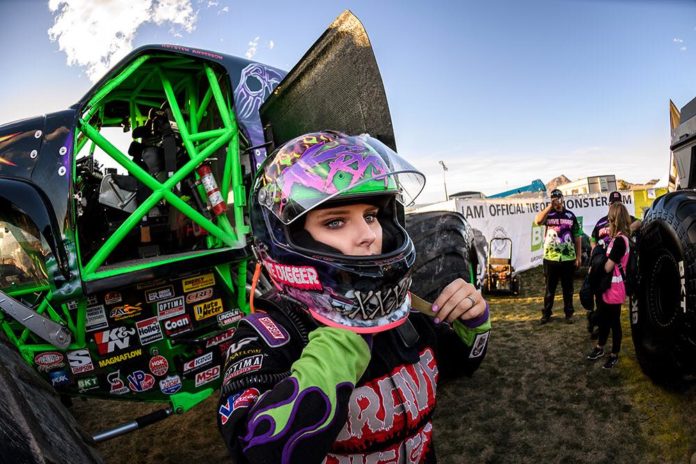 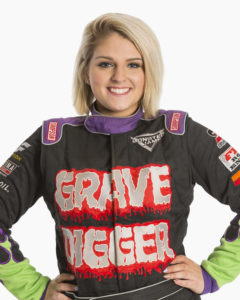 Anderson and her vehicular cohorts roar into town on Friday, Feb. 7 for the weekend-long Monster Jam Triple Threat extravaganza at PPG Paints Arena. The annual event typically hits Pittsburgh around Valentine’s Day, because there’s nothing more romantic than twisted metal and exhaust fumes.

Krysten won her first overall championship in the Steel City, so it holds a special place in her heart.

She’s been behind the wheel of Grave Digger since 2017, but her affiliation with the mechanical beast goes back a lot further.

Krysten is the daughter of Dennis Anderson, the truck’s creator and original operator. In the early 1980s, he Frankensteined the formidable machine out of a 1951 Chevy Panel Wagon and some junkyard parts. These days, there are seven Grave Diggers with fiberglass bodies on the Monster Jam circuit. They’re each 12 feet tall, 12 feet wide and weigh 12,000 pounds.

Krysten’s brother Adam is a fellow GD driver, while her other sibling, Ryan, steers Son-uva Digger.

Growing up in Currituck, a tiny hamlet on the North Carolina coast, the kids had no idea their family ride was so popular. It wasn’t until they started competing in rallies that they realized the impact Grave Digger made on audiences and crush cars alike.

After graduating from high school, Krysten had plans to go to college to study graphic design. She wanted to create concept vehicles for Monster Jam, which is run by Feld Entertainment.

In 2017, Grave Digger’s 35th anniversary year, Feld Entertainment dangled the keys in front of her.

“I had such a huge foot – my dad’s foot – in the door,” she says. “So many people wait their entire lives to do something like this. I didn’t feel right saying no without trying it first.”

From the moment she started the engine, she was hooked.

Driving Grave Digger, she says, is like being a one-man-band. Strapped into the roll cage, she’s able to maneuver just enough to move the front tires with the steering wheel and the rear wheels with a toggle switch, all the while doing flips and catching some serious air. 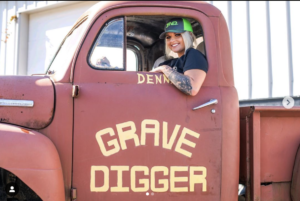 As a woman, she’s a minority in the high-octane sport, but that doesn’t bother her. In Pittsburgh, she’ll be joined by Brittany Marcotte, driver of Zombie. The ladies of Monster Jam are a force to be reckoned with, reaching speeds of up to 70 miles per hour and racking up awards.

“I don’t see myself as a female driver,” she says. “I’m Krysten. I drive a monster truck. Let’s race!”