Since his teenage years, Kevin Saftner, always wanted to pursue a career in music. After years of being a DJ, he now is the head of one of the biggest music production agencies in Pittsburgh, James Street Promotions. Best known for bringing talented musicians to the bar scene, James Street Promotions has had a great deal of success among the local crowd and Saftner hopes for many more years of continued success.

1. How did you get started in the music industry?

When I was about 14 or 15 and I remember starting to “Burn” CDs from Napster and Limewire I remember hearing the artist Atmosphere for the first time and it blew my mind.  It was the first time I heard something that wasn’t on the radio or MTV.  I knew I wanted to get the music out to more people so decided to start DJing birthday parties, school dances etc. 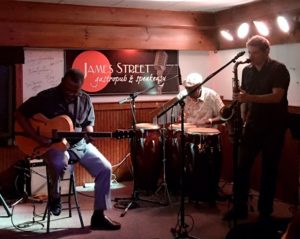 3. What are your thoughts on the current music scene in Pittsburgh?
I think the Pittsburgh music scene is doing just fine.  There are always things that could be better for sure but overall I think we all should be proud. There is a wide variety of music available for almost any taste as well as numerous venues that fill different niches.  If you want to hear world-class music in Pittsburgh there are at least a few options every day during the week.  People forget that Pittsburgh is not a massive city.  Within the city limits, we are only the 68th largest population in the country.  There are many bigger cities that we are doing much better than and I hope folks recognize this.
4. What have you been up to since Gastropub?
I have spent a good bit of time working with PointBreezeway as well as many one-off events with groups like Redfishbowl.  After a short stint at the now-defunct Stage at Karma I have found a home with Wolfies Pub, NOLA on the Square, Il Pizzaiolo Warrendale & Hampton as well as Enix Brewery in Homestead.  I know have a business partner Emily Kelly who has been a lifesaver trying to juggle all of these different locations.
5. What are the future plans?
James Street Promotions will be working with Voodoo Brewery in both Homestead and New Kensington in the coming months on a live entertainment series.  Besides this we do not plan on expanding any further but focusing on building up all of our current partnerships.  We are working on some bigger events in Market Square as well as a small festival in the Homestead area that we think everybody will enjoy.
For more details on James Street Promotions, check out their facebook page @JamesStreetGastropub