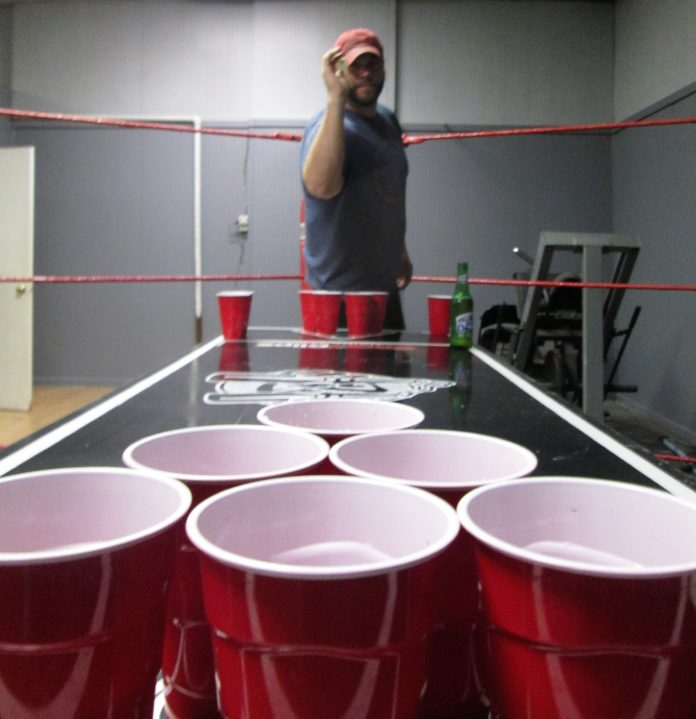 James Porco calls himself the David Hasselhoff of Martial Arts. His 2013 book, “Bar-jutsu: The American Art of Bar Fighting”, topped the bestseller list in Germany for three consecutive weeks and has sold more than 200,000 copies worldwide. The 40-year-old Baldwin resident, who is a 5th Black Belt in German Sakibo, included his contact information in the tome and still receives emails from Deutschland on how to handle aggressive drunks. Like the Buddha-esque bouncer played by Patrick Swayze in “Road House”, Porco doesn’t condone violence, but he believes everyone should practice self-defense and conflict resolution. And that doesn’t mean smashing a beer bottle over some inebriated jerk’s head. 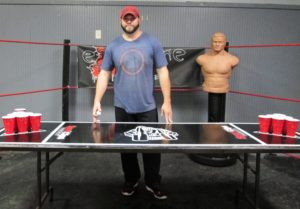 At watering holes throughout the city and at Bar-jutsu Academy, his dojo on Brownsville Road in Carrick, Porco teaches average folks how to protect themselves if happy hour drinks turn into late-night fisticuffs. He uses tactics gleaned from a lifetime of practicing martial arts. When he was 8 years old, Porco began taking Judo classes in the facility he now owns.  He teaches the maneuvers step-by-step using imagined, but potentially real, scenarios. Perhaps a fellow bar patron doesn’t like your karaoke selection and attempts to wrestle the mic away from you. Thanks to your Bar-jutsu training, you won’t be the one singing the blues.

Damian Fizek, 20, of the South Side, was looking for a new hobby that would mesh with his love of mixed martial arts. He joined the dojo in 2016, learning hand-to-hand combat techniques, including how to disarm a crazed gunman. “I never have had to use my training in a real life scenario besides to break up a fight or two, but I strongly believe that James prepared me more than well enough to defend myself,” he says.

A video game version of Bar-jutsu also is available on iPhone and Android. Players make their way through a digitized Pittsburgh, taking on foes and earning points that can be cashed in for actual goods and services, such as free haircuts at SportsClip, a local sponsor. If you’re more of an old-school gamer, Bar-jutsu Academy has its own beer pong league. In addition to his ninja-like skills, Porco is a master of pong, and often totes a table, Solo cups and a bucket of balls to bars when promoting his business.

Every other Saturday, he converts his studio into a pong paradise; covering the mats with Astroturf and setting up tables, including one in a boxing ring in the back of the room. Matches that take place there are broadcast live for the Gonzo Podcast Network. There are currently eight teams, with two to six players each, that are sponsored by local businesses, including Sports Clips, Primanti Bros. and Rusty Gold Brewing. The beer is BYOB. Participants aren’t just playing for bragging rights. When the season ends in December, the winners will walk away with $1,000, custom-made championship belts and a ticket to the World Series of Beer Pong in Las Vegas. For Dale Miller of Canonsburg, league night at Bar-jutsu Academy is nostalgic. “It’s like going back to college,” says the 32-year-old Edinboro University graduate. “It’s very competitive. Everyone here takes it seriously and plays one-hundred percent every time.” His friend, Tracy Hanabeck, tagged along to see what all the fuss was about. Despite her inexperience, the beer pong novice was able to sink cup after cup.

The game, long-associated with fraternity basements and tailgate parties, is gaining more respect as a legitimate sport. Porco is using its popularity to help one of his best students, Billy Dusch, one of three men injured earlier this month in a Whitehall house explosion. On Friday, Oct. 26, Bar-jutsu will hold a beer pong championship at a to-be-named Primanti Bros. location. Through the tournament and a GoFundMe page, friends and family are hoping to raise $50,000 to help cover the costs of Dusch’s medical expenses. https://www.gofundme.com/billy-dusch-severe-burn-victim Porco says he’s received a lot of inquiries from people in other cities looking to open satellite Bar-jutsu Academies, but, for now, he’s happy expanding the brand throughout the ‘burgh and using pong to support a friend in need.

“The idea started out as how to defend yourself in a bar, but now it’s become more like entertainment,” he explains. “It’s more of a community for people to get together and have a good time.”