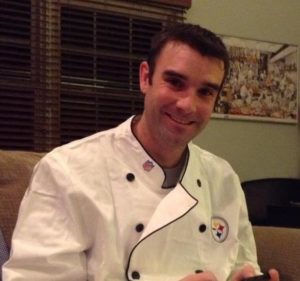 When Chef Jimmy Brown opened Ease Modern Comfort Cuisine in Regent Square, he found it difficult to draw a regular crowd. Locals liked the food, but missed Dunning’s Grill, which operated out of the Braddock Avenue building for three decades.

By rebranding as Frick Park Tavern, Brown hopes to give the community the gathering place it deserves. “I want it to work for the neighborhood,” he says. “I want them to know that I’m listening.”

Not only did Brown grow up near the 644-acre green space, his mom, Louise Brown, served as city parks director for 25 years.

Amber Hartman, VSAG’s managing partner and vice president of restaurant operations, says nostalgia is a big part of the new concept. “When we were trying to come up with a name, we wanted something with passion behind it,” she says. “This brand really resonates; it fits the community and tells a story.”

The décor will change dramatically, going from a bright, sterile environment to a warm, inviting place with textured walls and intimate lighting. The bar will become a focal point, and Brown hopes to incorporate family photos and his mom’s work-related mementos into the mix. He wants the ambience to match the food.

Brown, a veteran of several white tablecloth, fine dining restaurants such as Luma in Aspinwall, says he will continue to serve locally sourced, scratch-made dishes, all at an affordable price. He’ll offer beer and classic cocktails, of course, but wants to focus on curating a good wine list.

Hartman, a native of South Western Pennsylvania, says she thinks Regent Square residents and visitors alike will appreciate the changes and flock to Frick Park Tavern.  “It’s a much better fit for the community,” she says. “The entire block has so much going on. Its nice to see small businesses flourishing.”