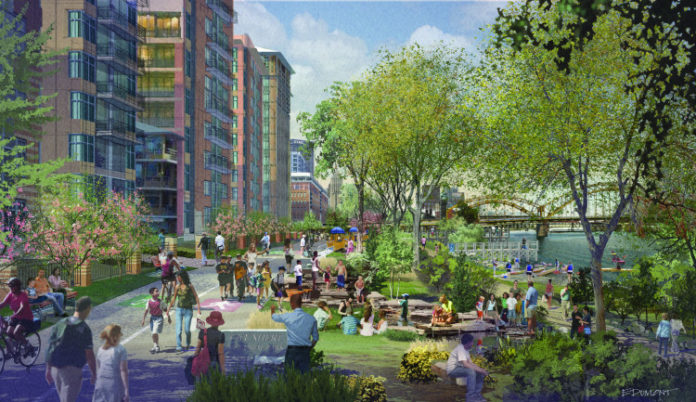 DECADES BEFORE the first Earth Day in 1970, there were discerning dreamers who urged their contemporaries to envision a greener urban future.

One was Haniel Long, English Department chair during the 1920s at Carnegie Institute of Technology (now Carnegie Mellon University), who wrote an unusual 1,100-word short story for the June 20, 1923 issue of The Nation.

“How Pittsburgh Returned to the Jungle” traced the extraordinary, yet plausible series of unintended events stemming from an accidental piece of local legislation that transformed industrial Pittsburgh into a globally acclaimed, smog-free utopia of scenic beauty and abundant prosperity.

It was wishful fiction, of course, and a few years later Long moved to the New Mexico desert to escape Pittsburgh’s infamously unhealthy air.

But is it possible in our time for comprehensive environmental transformation to occur by design rather than accident?

In Long’s tale, the process began with a simple wooden box planter being affixed to every window in the city.

For today’s Pittsburgh, here are ten Green possibilities that, if properly scaled and propagated, could hasten our transition into “a city of unfading flowers with beauty its source of livelihood.”

1) Healthier homegrow soil. At their Ambridge factory, PittMoss® turns recycled paper into consumer retail organic gardening mixes well-suited for indoor garden projects. In 2019, PittMoss calculated their products prevented emission of 597 metric tons of CO2 — the equivalent of burning 628,062 pounds of coal or driving 1,414,392 auto miles — while keeping 67 tons of paper and 70 tons of cardboard out of landfills. Imagine the health impact if each of our 550,000-plus metro area households had an easy way to add an extra bit of plant-based cuisine to their diet … or just a few on-call flowers to redd up the place.

3) Print-your-own bricks. Maybe you’re interested in some interior changes in your new modular house. CMU design prof Daphne Peters and husband Brian, owners of Building Bytes, have pioneered the use of 3D desktop technology to print solid “bricks” that can be stacked and interlocked to build structural walls. Each brick pattern can be configured for installation in a variety of household settings, including mortared and grouted freestanding screens and framed room dividers. It’s the ultimate DIY hack for those who like to DIY even their own building materials.

4) Smarter smart-houses. If achieving a truly energy-efficient home or workplace depends on managing the basics, you can start with your wall plugs and their “plug load”. The 120V Smart Plug manufactured by Bloomfield’s BOSS Controls uses in-house WiFi to measure and control energy use from a 120-volt outlet, the standard electrical outlet in North American buildings since the 1950s. The 220V Smart Plug handles bigger items like wall air conditioners, pumps, ceiling heaters, vending machines and office equipment. The City of Pittsburgh has been using BOSS Controls since 2015 to get a handle on building emissions that make up 80% of the municipal carbon footprint.

5) One big civc brain. Speaking of WiFi, Allentown’s Meta Mesh Wireless Communities has been striving since 2012 to provide all Pittsburgh neighborhoods with free, high-speed wireless internet. Local foundation grants and business collaborators have moved the group closer to its goal of establishing the nation’s largest community-owned public WiFi network. The foundation for a true knowledge-based economy starts with all citizens having access to digital information sources.

7) Mobilizing mobility. Reimagining how to navigate a topographically-complex town like Pittsburgh is the charge of Pittsburgh Mobility Collective (PMC), a program of the City’s Department of Mobility and Infrastructure (DOMI). They’ve started with “mobility hubs” at Port Authority transit stops where a traveler will find bike-share stations, rental cars and carpool pickup spots, parked and charged e-bikes and scooters. An app handles route planning and ticketing while feeding data analytics back to the DOMI. The truly revolutionary aspect isn’t the technology but the cooperative corporate consortium working to bring about a Pittsburgh where safe travel and access to life’s necessities don’t require the expense of owning your own vehicle.

9) Green ’em while they’re young. Allegheny County’s under-18 population is an estimated 18.7% and rising; helping those 230,000 or so youngsters grow up to be Green champions is the mission of educational initiatives at Pittsburgh Public Schools’ Carmalt Academy of Science and Technology, Environmental Charter School, Pittsburgh Park Conservancy, ALCOSAN Summer Science Program, Tree Pittsburgh and university-based efforts including Pitt’s Mascaro Center for Sustainable Innovation, CMU’s Steinbrenner Institute for Environmental Education and Research, Chatham’s Falk School of Sustainability & Environment and Point Park’s environmental journalism program. Like any other part of a balanced ecosystem, environmental literacy thrives best with early planting.

If Haniel Long were a Pittsburgh resident today, he’d undoubtedly be impressed by how the city has adapted its 1900s smokestack economy to the present research-and-development focus of technology, healthcare and education with affiliated growth in tourism, hospitality and the arts.

But the full ecological makeover he foresaw as the means to achieve a truly Most Livable City remains for now just over the horizon, yet tantalizingly within our grasp as new discoveries of imagination and fabrication arise from a dedicated Green legion seeking to give voice to the professor’s rapturous cry:

“Oh to be in Pittsburgh, in beautiful Pittsburgh!”