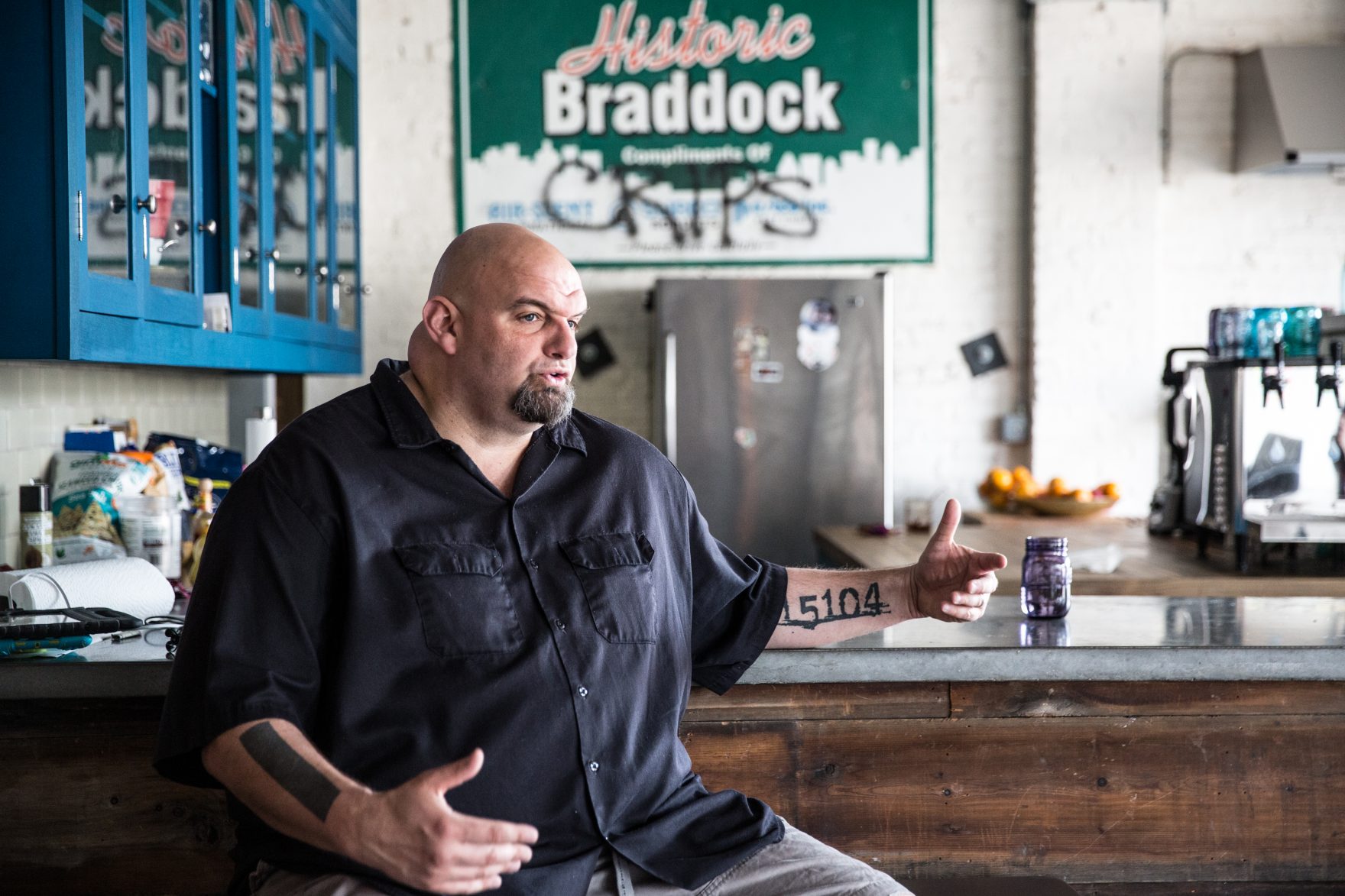 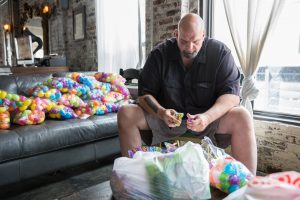 Looming over them is the hulking, 6’8” frame of Fetterman himself, wearing his signature black Dickie’s shirt, 15104 tattoo visible. He picks up an egg, carefully separates the halves, and inserts a few pieces of candy with the thoughtful intention of an impressionist artist.

“This is the glamorous side” he deadpans, reaching for another.

It’s a joke, but this is, after all, the same guy who was on The Colbert Report, The Bill Maher Show, invited to the White House to meet President Obama, and continues to be a source of fascination with CNN, MSNBC, The Nation, and The New York Times whose headlines scream, “Tattooed, head shaven, straight talking Mayor wants to Be the Next Senator from Pennsylvania”; “Mayor of Rust”; and “The Giant Underdog.”

It’s just after 1 o’clock on the Thursday before Easter – a few weeks before the April 26 primaries and 24 hours after a grassroots campaign stop in Erie, where people desperate for change, answers, and a voice showered him with a hero’s welcome. “There are three bridges that have been closed and condemned in my town. Why run for Senate? So I can get the money to fix them,” he says. There are a million things John Fetterman could be doing right now to further his cause: glad handling, scoring corporate endorsements, currying favor with the political in crowd, posting selfies with celebrity friends. 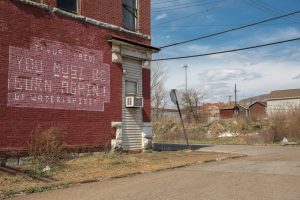 Instead, the man The Guardian dubbed “The Coolest Mayor in America” picks up another egg – hot pink – that will become one of hundreds scattered throughout the Braddock Community Park for the annual Easter Egg Hunt. An event he began in his front yard 10 years ago.

“I hate to see who gets in next,” said Dana Portokalis, 41, a lifelong resident who attended the hunt with her three kids. “They ain’t gonna do what he does.”

Stuffing plastic eggs was one in a series of remarkably unglamorous tasks filling Fetterman’s Thursday agenda. Earlier, someone needed to run to the Waterfront Costco to pick up donated food for The Free Store, an errand his wife Gisele gently reminded him of with an affectionately blown kiss.

When his black Ford F150 pulls up at the receiving door, a voice calls out, “The mayor is here!”

Within minutes, a metal cart appears carrying shrimp cocktails, chicken salad, shrimp salad, roasted chicken and Swiss rolls, and pork tenderloin with seasoning. “First quality stuff,” John says. The food is all marked to expire that day, but instead of being tossed, it will end up in the hands of people who need it. “If you think this is better off in a Dumpster than someone’s stomach, you can go f-yourself,” he says.

When he arrives at the Free Store, a cargo container painted orange, blue, green, and yellow, people are waiting. The parking lot is packed. He helps unload the truck and then hangs back as Gisele runs the show. This is her baby. As he watches, the furrowed brow disappears only when his three kids greet him excitedly. 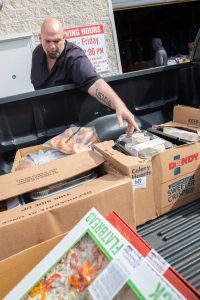 Fetterman never sugar coats what he’s up against, nor does he consider himself to be a miracle worker –for him, the miracle still hasn’t happened.

There is no plan for urban sprawl, no dream scenario.

“In a dream scenario I would have a full head of hair,” he quips. Sustained rebound is the plan. He’s not concerned about gentrification turning Braddock into the next East Liberty or Lawrenceville. He’s worried about Braddock’s 400 abandoned homes and keeping that number from growing.

He becomes agitated while reciting a story in The National Review entitled, “If Your Town is Failing, Just Go.” Letting a town like Braddock die is an appalling option. “The attitudes of ‘fuck it’ or ‘why bother?’ starve off places like this,” he growls.

Most people probably would have let Braddock die. Put it out of its misery. Even he’ll admit that ninety percent of what used to include 30 tailors, 14 jewelers, 5 banks, 5 car dealerships, 51 barbers, 3 newspapers, 53 restaurants, 9 department stores, and 14 furniture stores is now in a landfill. Braddock Avenue, once bustling with 20,000 residents, has gone on life support.

Fetterman refuses to pull the plug. There’s a reason why he paid for those 1,500 pieces of candy with his personal debit card, why his phone is on 24/7, why he drives the streets every day, talking to people, keeping an eye out.

“The work he’s done,” says Raemon Prunty, 15, “we need that for towns like Braddock all across Pennsylvania.” 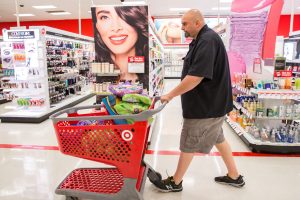 Braddock has come a long way, agrees resident Elaine Glover, but still has a long way to go. “There’s no gas station, bank…we don’t have nothin’ out here. If we had that kind of stuff we’d be alright.” She gets irritated when she sees remnants of plastic bags stuck in tree branches. But she believes in Fetterman. “He’s caring…he’s a really good guy.”

Fetterman’s permanently furrowed brow mirrors that of his town’s grim determination.  On a desolated street where one house remains, the front door is covered in shiny black and gold ribbons, Here We Go! posters, American flags and Steelers, Penguins, and Pirates logos: homage to a city – and a nation – that looked the other way while Braddock slowly rotted with the collapse of the steel industry.

Change has been slowly coming – but he refuses to take any credit.

If your town is failing, just go? If Fetterman had skipped town, there would have been no Levi’s “Ready to Work” campaign with 100% of the proceeds going back into to the community, no Braddock Youth Project employment program, renovation of the Nyia Page Community Center, Allegheny Health Network Urgent Care, or 24 subsidized apartments built on the former site of UPMC hospital.

The Fetterman’s aren’t looking for any return on their investment other than paying it forward. John has never kept a single mayoral paycheck. The $150 he earns every month is passed along without hesitation to any resident who needs it. If he does win the Senate bid, he’ll commute to Washington. The 15104 will always be home.

“It’s wonderful and admirable what he’s been doing,” Jordan added. “If he didn’t believe in Braddock, who would?”