When I went to Bridges & Bourbon for the first time in the summer of 2019, I was awed by my initial first looks: a beautiful, detailed bar, dark walls, and light-colored, aesthetically-pleasing seating. It was as if a SoHo bar and restaurant had somehow emerged in the heart of Downtown Pittsburgh, in that ‘I’m judging this restaurant like a book cover’ type of mentality. 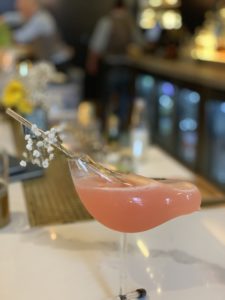 What’s more, when I saw drinks being served in glass birds and pineapples, menu items that I had never before seen in this city, even intimidating, I was wary of what the spot would evolve into past its initial hype and excitement.

Admittedly, I had not been back to Bridges until 2020, when I was on the search for a Friday night spot downtown to meet a friend. (Technically, I did try to go on a December Monday, but they were closed, but I digress.) To my pleasant surprise, the space was bustling with glasses clinking, the shaking of drinks, and laughter from the almost full dining room and bar. It was refreshing and exciting to see so many people enjoying themselves, the space, and the vast menus. 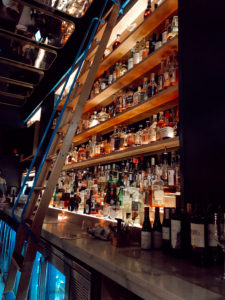 Upon glancing at the menu, There was a list of changes for the space for the new year, such as being open every day starting at 4 PM (yes, this includes Monday), a kitchen that’s open until 11 PM every day, and many positive and bold additions to the menu in both food and drink. I was elated to see familiar yet elevated dishes, such as chipotle fries with a beet ketchup and green herb aioli (Heinz forever, but I am always down to try new things) as well as a truffle mac and cheese fritter which I am still thinking about.

I also learned that the bar menu was still eclectic and experience-based, but definitely more approachable and digestible than the original menu. Fragile glass birds were nowhere in sight and I indulged in not one but two Robby Boy’s, containing Knob Creek maple, Borghetti espresso liqueur, vanilla, chai. 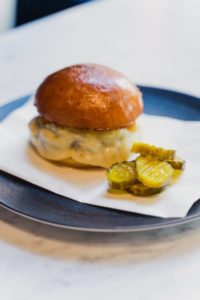 Very unplanned, but my friend and I ended up essentially closing down the bar after FOUR hours catching up, taking in the scene, taking sips and nibbles, and engaging with the staff. I made a mental note as I ordered my Uber home that this would definitely not be the last time I shut down their bar… or ordered the fritters while doing so.