The food and ambiance at or, The Whale might inspire you to write the next great American novel or, at least, a glowing Yelp review.

Just as its name is a nod to Herman Melville’s masterpiece “Moby Dick,” a nautical theme flows throughout the downtown restaurant’s menu and décor.

Chef de Cuisine Tim Kratt, who came aboard last December, adds French influence and California flair to the seafood-forward dishes. Guests can dive into house specialties such as Crab Mac and Cheese or the Fish Stew, a mixture of market fish, scallops, shrimp, clams, mussels, fennel and garlic in a spiced tomato broth served with a baguette. 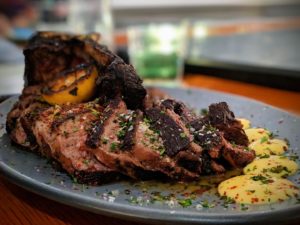 Aren’t a fan of under-the-sea fare? or, The Whale has an on-site butcher room and wood-fired hearth. Carnivores can sink their teeth into a heritage pork chop or a variety of steaks, from a 14-ounce New York Strip to a 52-ounce Porterhouse.

“What really caught my eye about Tim is his passion for what he does, his dedication and the hours he’s put in,” says Bill Shannon, director of operations. “When you see a good talent you have to go with it.” 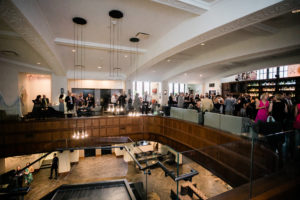 The cozy, second-floor bar is a great place to sip a cocktail or snap a selfie against the sailor tattoo-inspired wallpaper. In fact, the entire restaurant is Instagram-worthy.

Attached to the boutique Distrikt Hotel in the former Salvation Army building, or, The Whale occupies the old gymnasium. Renovated in 2017, the space features an open kitchen, a window into the butcher room and a wine cellar that doubles as a private dining area.

On the second level, there’s a loft track for catwalk seating that towers above a large “Moby Dick” mural. 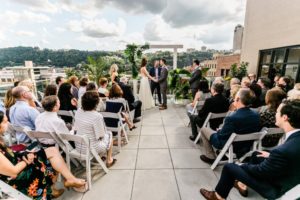 Landlubbers can view the Monongahela River from the rooftop terrace. The spot is a popular site for weddings and other special events.

There’s another chapter to or, The Whale. Its sister restaurant, The Boulevard Lounge, overlooks the Distrikt Hotel’s lobby and still exudes a 1940’s charm. In addition to cocktails and a wide selection of beer and wine, it offers more casual cuisine that’s perfect for hurried office workers and weary travelers.

Lunch items include the signature Whole Farm Burger, a “whale” of a fish sandwich, wings, and lobster fritters.

Bookworms will love the literary setting, but everyone who drops anchor at or, The Whale will enjoy a good meal.

“What separates us from other downtown restaurants is the atmosphere,” Events Coordinator Rachel Borovik says. “The history of this building is really special and we offer the highest quality food and service.”

or, The Whale is located at 463 Boulevard of the Allies, Downtown. www.orthewhalepgh.com