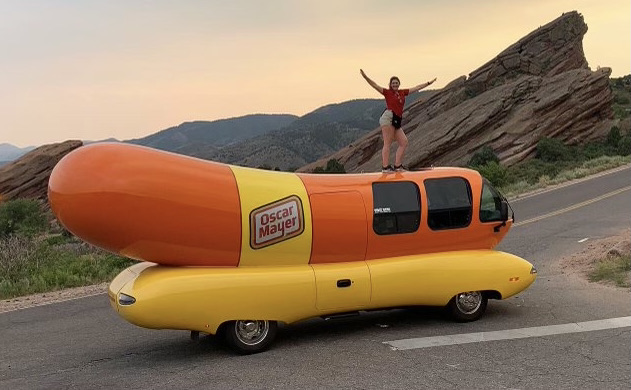 The Pleasant Hills native is touring the United States behind the wheel of the Oscar Mayer Wienermobile. Aul, along with fellow Hotdogger Spencer Bernhardt of Madison, Wis., is hauling her buns back to Pittsburgh for a weekend of festivities. 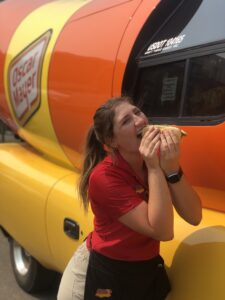 There’ no better way to spend Valentine’s Day than kissing your true love in front of an enormous piece of Americana that’s been on the move since 1936?

There are six different Wienermobiles touring the country at any given time. Aul’s ride is 60 hot dogs long, eight feet wide and 11 feet tall. It boasts a V-8 engine mounted on an Isuzu chassis and has storage for 4,000 Wienerwhistles. The horn plays the “Oh, I Wish I Were An Oscar Mayer Wiener” jingle, a fun feature during rush-hour traffic. 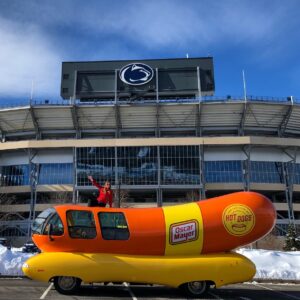 Aul, 22, who graduated from Penn State University with a degree in advertising, says she wasn’t familiar with the motorized meat until it visited the campus during her freshman year. Her career advisor encouraged her to apply for the Hotdogger position.

Aul beat out more than 7,000 other applicants to earn one of 12 spots.

She feels her appetite for adventure – she studied abroad in Paris – helped her cut the mustard with the higher-ups at Oscar Mayer.

She spent two weeks at Hog Dog High in Madison, Wis, an institution founded in 1988. Since July, Aul has steered the rolling sausage through Nebraska, Colorado, Idaho. Utah, Oklahoma, Texas, Louisana, Arkansas and Indiana, stopping to do private and public events Thursdays through Sundays.

After a three-week stint in Pennsylvania, she’ll head down the East Coast. Since the Wienermobile has no sleeping quarters – it’s not a “Weeniebago” – she stays in hotels along the way.

Her Hotdogging days end the first week of June 2021. After that, she plans to go to graduate school.

Aul says her favorite part of this one-of-a-kind road trip has been visiting five national parks. She also relishes the simple moments, like driving through random neighborhoods and seeing the reactions of dumbfounded dads out mowing their lawns.

Each time she cruises around a community the situation plays out like this: people stop, stare, point, and then cheer. And that’s no bologna.

“I’m getting paid to make people smile,” she says, “and I get to see America through the wien-shield.” 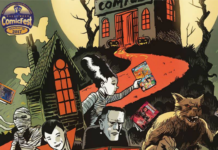