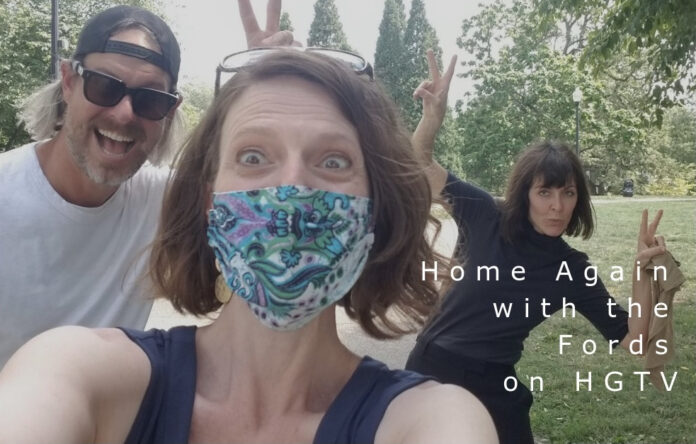 Allison Pochapin, a Coldwell Banker Realtor, returned to Pittsburgh after a west-coast hiatus, not only to her hometown city but to her actual childhood home. “I never imagined buying my childhood home, but when the opportunity came up I couldn’t pass it up.” Her family home, located in Squirrel Hill across the street from Mr. Roger’s, has been in the Pochapin family for over 50 years.

Leanne and Steve Ford, a brother-sister duo, have returned to their hometown, Pittsburgh, with a new show, Home Again with the Fords, featuring residents who move back to their childhood homes, childhood streets, or childhood neighborhoods. The process to be featured on the show is rather selective and includes numerous walk-thoughs, photos, videos, trust, and a whole lot of patience. Allison is the only person within the city limits on this series to have bought the home she grew up in.

Allison moved into her parent’s home in December 2019, in February her Facebook feed was full of flyers advertising the Ford’s new show with instructions on how to apply. By June, Allison had been selected and was meeting with the Fords to discuss their design plan and the next few steps in the process. The sibling duo met with Allison to show her their idea board full of inspirational images for the decor and upgrades, as well as a layout plan for the first floor.

By August Allison was renting an Airbnb in Pittsburgh while her entire first floor was facing a renovation. “I moved out of the house for 12 weeks and they asked me to not even drive down the street while the renovations were happening. I did not see the progress along the way. When I watch the show on the 16th, I’ll be seeing the footage for the first time.” Her episode airs tonight, Tuesday, February 16th at 9 pm on HGTV!

During the design meeting, Allison was ready to put a new face to an old home; however, there were some elements of her childhood she couldn’t let go of. Leanne and Steve were extremely understanding and happy to compromise by refurbishing the original hardwood and leaving the wood stripped mantles in place.

Allison lost her mother in 2019, and her father in 2020 before the show began filming. Her father passed away in June “It’s been bittersweet to lose my parents and have it renovated and to show the world on television was amazing but very emotional.” Allison’s unique storyline adds to the sentiment of the Pittsburgh-based series, in addition to separating Allison’s story from other episodes, as each episode features a new family with a new story.

While talking with Allison about the project she shared that she cried in each room she entered during the reveal, “Your heart is in your childhood home,” Allison shared with us as she discussed her emotional roller coaster, “I have been helping people buy and sell homes for nearly 20 years. It was a highlight to be in the client seat this time and have a beautifully renovated house to come home to, let alone film the process for a TV show. The Fords did a fabulous job of restoring the space in a way that honors both my parents and much of the original character of the home while taking into account my own personal style. What a wild experience and special opportunity.” We look forward to tuning into Allison’s episode this Tuesday evening, putting Pittsburgh on the map once again, this time truly in Mr. Roger’s neighborhood.

Here are some of the BEFORE pictures, to see the AFTER tune in tonight 9pm HGTV (and to see the full schedule of airings click here)